Every year, several publications put forth lists of fit and healthy cities.  Each publication combines a certain set of metrics to generate their lists. In looking at a sample of different healthiest and fittest city rankings published in 2015 and 2016, one thing is abundantly clear – three cities dominate the top spots: Minneapolis, MN, Washington, DC, and Boston/Cambridge, MA.  While one list has two California cities that tend to conjure up images of a populous pursuing outdoor active lifestyles, the same with Denver on another list, for someone who has lived in Washington, DC and near Boston, while they are great cities, I never thought either as the healthiest or fittest (nor unhealthy/unfit).

There are both private market and public policy mechanisms that land these cities on the top of these lists.  Technically, almost everything is impacted by public policy through zoning and permitting, but that’s another blog for another day.  Some factors directly influenced by public policy include:

In its list, the American College of Sports Medicine (ACSM) stressed the importance of public policy by comparing park related expenditures per resident and the percentage of the population that lives within a ten-minute walk of a park amongst its cities.  ACSM even provides a community action guide to empower communities to improve their collective health and wellness.

Therefore, as I sit here, not having exercised in over a week (stupid sciatica!) enjoying another glass of wine, I think of how Philadelphia compares and how the economics of our city impacts public policy decisions that could then impact the health and fitness of Philadelphians.

In 2014, Philadelphia had the highest percentage of bike commuters among large cities[1]; more than 10 percent of Philadelphians bike or walk to work[2]; we have the largest landscaped urban park, Fairmount Park, which includes the 1,800 acre Wissahickon Valley Park and a significant section of the ever-expanding Schuylkill River Trail (SRT). Philly also has a dense concentration of world-class hospitals where a local’s head could spin when trying to select a doctor. All except the latter are directly impacted by public policy.

That’s when I wonder if there are simple economic and demographic indicators that could significantly (in a non-statistical sense) separate Philadelphia from Minneapolis, Washington, and Boston which would affect public policy, market demand, and overall perception of our city being healthy and fit? Part of the hypothesis is that Boston and Washington, DC’s economic and demographic indicators will be similar to Philadelphia’s. However, perhaps our poverty rate, which includes sections of the City where many residents live in deep poverty, forces public policy to focus an accessible jobs, vocational training, and education, and not on health and fitness (another debate for later).

Philadelphia is the largest of the four cities and in all selected statistics, performs the worst – poverty rate, education, income, and commute time to work, and it also has the lowest median property value. The other three cities all trade spots among the different indicators. For instance, after Philadelphia, Minneapolis has the next highest proportion of its population that does not have health insurance, Boston has the next lowest high school diploma achievement rate  Philadelphia, and Washington, DC has the next longest commute time to work after Philadelphia.

This is just the beginning of exploring economic and demographic indicators and their intersection with public policy decisions and their impact on populations’ health and fitness. For instance, which economic and demographic indicators can help explain why public policy in these other cities seemingly can focus more attention on residents health and wellness (after accounting for politics of course)? Does Philadelphia’s high poverty rate directs its spending elsewhere?  Another analysis would be to track government spending the way the ACSM survey does, however noting that dollar spent per capita is not an indicator of how effectively or well that money is spent, just that it is spent. Or, one could compare zoning codes and community development plans and their emphasis on parks and recreation centers, bike lanes, and so forth.

As you can see, there are still lots of questions to ask and angles to explore in future blog posts. The bigger question I need to answer right now is do I stay up and have another glass of wine, or go to bed so I can get in a run on the Schuylkill River Trail before work? 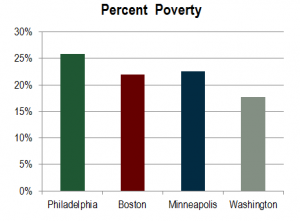 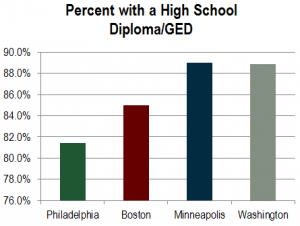 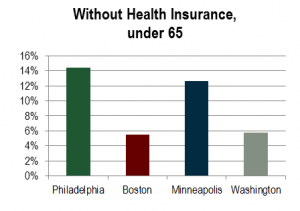 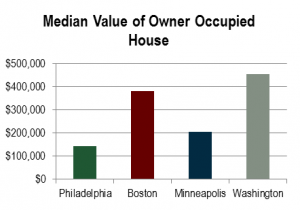 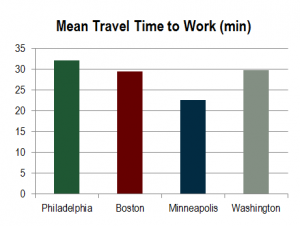