Girl on the Train…to Manayunk

For almost ten years, I rode the Manayunk/Norristown SEPTA line from the Wissahickon train station to Suburban Station.  Last train car, the two-seater side, headphones on, and the whir of buildings out the window.  I recently moved to Center City, and that train ride is now a memory. I took the train one more time as I was headed back to Manayunk for our farewell bar crawl to our favorite haunts. That train ride became reminiscent and as I looked out the window, I recalled how much I have seen built along that line in the last ten years. 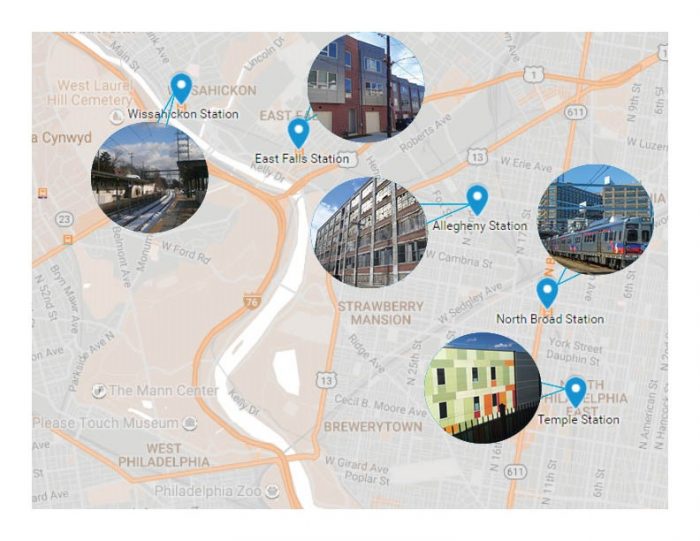 Every day I would ride from the edge of Manayunk, through the neighborhoods of East Falls, Nicetown-Tioga, North Philadelphia, Temple, and then underground to Center City.  Many of the areas have faced decades of blight and depressed property values.  There are abandoned industrial buildings, vacant lots, and boarded up houses along the line.

I remember when I first came to Philly, I kept envisioning the potential of these huge, old manufacturing buildings. The architecture on some is quite extraordinary. Why hadn’t a developer, or even a public entity, buy them and turn them into housing, flex office space, a job-training center, or a myriad of other uses? Or why isn’t that huge vacant lot a park for the houses surrounding it?  That was before I started working at ESI, where financing, location, and land use are part of my every day conversations.

The earliest investment I remember was in and around Temple University’s campus.

As the train enters the Temple station from Wissahickon, on the right side, as the train rounds the bend is Temple’s practice football facility. The Edgar-Olson Football Complex was renovated in 2012 – turning what previously was a sad looking practice facility into an eye-catching facility, one befitting a Division 1 football team.

The area around Temple University has a lot of affordable housing, with much of it being demolished and rebuilt.  Keeping to the right side of the inbound train, past the football stadium, the first phase of the Philadelphia Housing Authority’s new Norris Apartments (completed 2012) sit next to the existing, and soon to be razed older Norris Apartments that fan out past the train window.

On the left side of the train going into Center City, Paseo Verde (completed 2013), the award winning mixed-income development abuts the train line.

On the right side of the inbound train at the Allegheny station looms the Steel Heddle Building. The textile manufacturing building closed in 1983. At one point a talented graffiti artist painted the Simpsons characters in its highest windows. Overtime, more windows have broken, and the building continues to decay. Developers have explored the use of the building, with one of the most recent proposals for affordable housing, but that could be a long way off. It will be costly to restore this building and its location in a poor neighborhood and the challenge (who is up for it?) of where it would most likely become the anchor for future development.

Beyond the Wissahickon Train Station 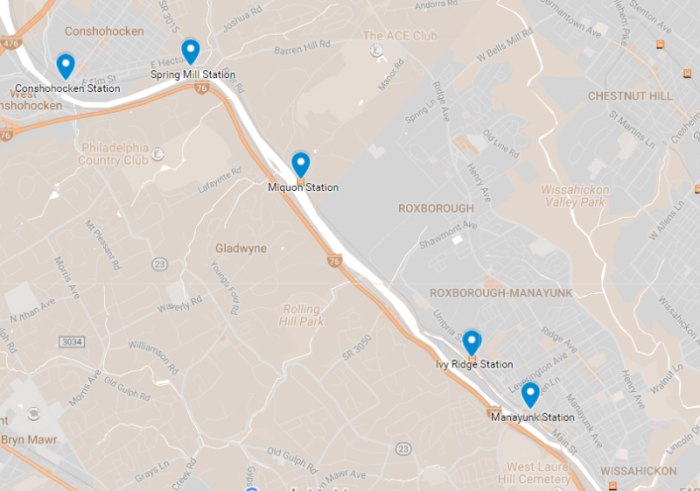 If I took the train further out, I would see more evidence of development, usually in the form of private, multi-family developments. I list three below that I came across most often, however, I saw these normally when I was out for a run or a bike ride on the Schuylkill River Trail where it runs parallel to the train line.

At the Ivy Ridge train station, wedged between the right side of the inbound line and the Manayunk Towpath is the multi-family Station at Manayunk (completed 2014).  This development has stairs leading its residents down to the towpath.

At the Spring Mill station, on the left side of the inbound trains, are the Courts at Spring Mill (completed 2015). The development includes a coffee shop with its sign set up along the Schuylkill River Trail to attract customers.

Of the handful of times I took the train out to Conshohocken or Norristown, I happened to be on the train on the day of the fire at the Riverwalk at Millennium complex in 2008. My outbound train stopped at Spring Mill where the confused passengers got off, me walking past the burning apartment complex up to the Conshohocken Train Station. Parts of the new apartment complex were completely destroyed due to an ember from a welding torch that was constructing an adjacent building. The apartment complex was quickly rebuilt by 2010.

The Conshohocken train station has seen significant commercial development over the past 15 years with many projects under way or in the planning process.

As we analyze, and advocate for, every day at ESI, transportation oriented development matters to both developers and those who live and work in those areas.  Residents desire an easy commute to and from work, and developers continue to take advantage of low cost financing, urbanization, and opportunities along the train line. In addition to the proximity to transit, residents from East Falls out to the Norristown Transportation Center have the benefit of being near, or immediately next to, the Schuylkill River Trail, the second selling point for many of these newer developments.

There are many more projects that have been recently constructed, announced, or planned for future development as these municipalities and private developers see the benefit to and market their transit-oriented developments. Above, are just a few that I have seen from my window on the train.