Imagine an urban city as a box. When one thinks outside this compartment, one is able to conceptualise that rural areas exist beyond this well-structured box. However, the inside isn’t well connected to the outside and vice-versa. One has smart street lights while the other encounters black outs. One relies on good roads and highways to be connected with the outside world, while the other is the ‘outside world’. How can governments around the globe bridge the digital gap between these two regions?

Along with robust public policy, broadband connectivity is the glue. It is a useful piece of technology that can help multiple industries within various sectors of an economy thrive, especially in rural areas. From smart agriculture to supply chain management and education to tele-health, people all over the world who reside in rural areas can use it as a connection to help access global information and cultural resources. Broadband connectivity has numerous advantages. It enables high power embedded LEDs to inform travellers about traffic conundrums and provide them with updates about the weather, it helps people take part in e-commerce and connects workers from a disconnected region to their company’s headquarters. The figure below highlights the gap between rural and urban users of broadband technology. 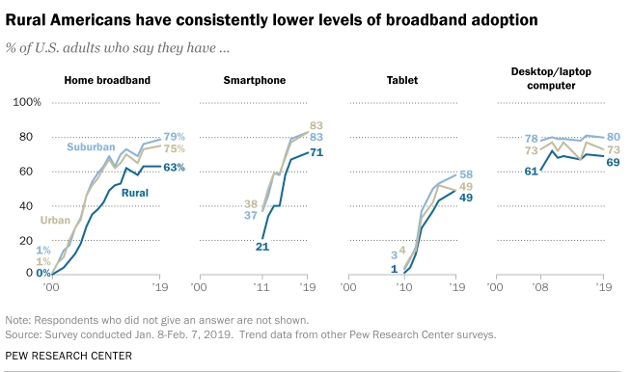 There are several firms which help set up a broadband connection in remote areas and even help provide educational programming and training on how to utilize this connection. NTCA (The Rural Broadband Association) is one such organization which helps its members build and deliver broadband connectivity. According to the NTCA’s guidelines, a company that serves a smart rural community is one that can:

According to NTCA, one in five Americans live in rural communities. So, what does the digital divide in the United States looks like? Figure 1 below illustrates the difference in internet subscription rates between rural and non-rural counties. Metropolitan counties, concentrated on the coasts, have much higher broadband subscription rates than non-metropolitan counties, with a significant gap in the southern part of the country. For example, the subscription rate for metropolitan counties in New Hampshire was about 82 percent compared to 48 percent in rural counties in Mississippi. Local businesses in rural communities that do not have access to the internet cannot compete with urban businesses which can sell on a global scale through the use of e-commerce. Additionally, local businesses in rural communities face a disadvantage due to their geography. There can be latency delays because of the distance between users and satellites. 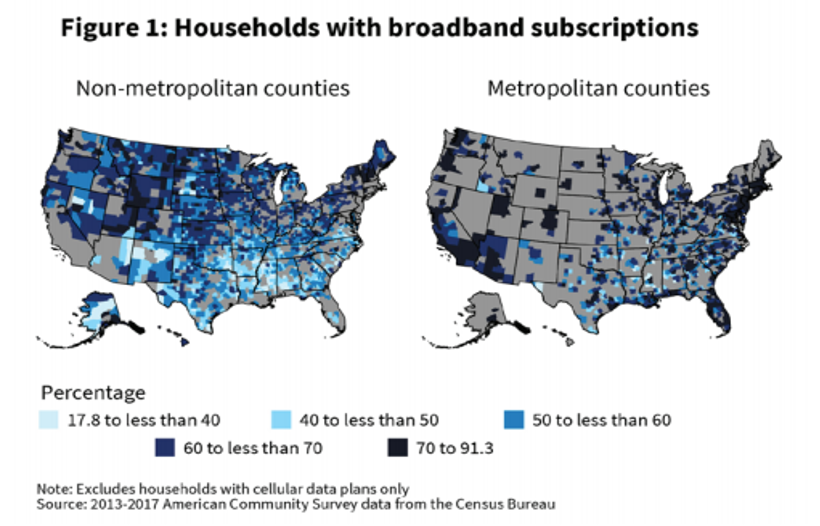 Broadband connectivity depends on solid infrastructure which can only be utilized if people are educated and know how to use it to maximize productivity. Hence, investment in education, as well as infrastructure, is fundamental for the foundation of broadband connectivity. An example of this can be found in Logan County, Colorado. The Logan County Economic Development Corporation (LCEDC) works to expand the county’s economic base. The officials of LCEDC developed infrastructure to support high speed internet. This provided the workers of the rural community with an opportunity to connect with people from different areas. LCEDC’s proved that by providing citizens with a strong internet connection it could create a practical workforce strategy of creating more jobs. Hence, Sterling, located in Logan County, was able to attract 25 new businesses. This included boutiques, restaurants, a microbrewery, and an arts co-op. This led residents back into town and attracted tourists. As part of its commitment to support teleworkers, Sterling opened a co-working facility in the town square, providing a shared workspace and community hub for rural teleworking residents and visitors.

So, what can elected officials really do to help their citizens be connected with the ever-changing dynamic world? One way is to simplify the process to apply for funds. Rural areas typically do not have large teams to conduct research nor do they have agencies that offer help in applying for these funds which can act as significant barriers to funding. Secondly, improving the accuracy of coverage maps can help bridge the gap, too. These maps need to be updated to see which areas really require help and funding. These two measures together can help unserved and underserved rural communities. Lastly, by connecting the private and public sector, communities can take advantage of emerging business needs and grow the economic base of their community. By connecting rural communities to cities and large metropolitan areas with basic broadband service, the country as a whole can grow economically and realize a greater standard of living.

Shaum Arora is a Drexel University Co-Op and Marketing Assistant with ESI. Shaum is currently majoring in Economics and minoring in Philosophy.