An Apple a Day Keeps the Doctor Away

Basically everyone knows that I love apples. But anyone who really knows me knows my absolute favorite type of apple. While I regularly eat an ordinary Gala or Fuji apple, no type stands a chance against the humongous crispy yellow Opals sold at Trader Joe’s. Are they better than Honeycrisp apples? Yes. Is Trader Joe’s the only place you can find them? Yes. Did I factor in the distance from Trader Joe’s when looking for a new apartment to ensure a close proximity to Opal apples? Most definitely yes.

While it is unlikely that many others share my addiction to Opal apples, it is in fact likely that many Philadelphia residents make housing decisions based in part on the accessibility to quality grocery stores. The oft-cited “Whole Foods Effect” has been illustrated in various case studies in urban areas across the country. These analyses demonstrate a boost in both residential and commercial property values caused by the opening of a Whole Foods in a neighborhood, as not only do residents want to live closer, but retailers are also drawn to the newly frequented area. A 2007 study focused on the impacts of urban amenities on residential prices in Portland, Oregon, showed that the presence of a specialty grocer such as Whole Foods resulted in a 17.5 percent price premium for nearby properties.  A similar study completed by RealtyTrac in 2015 found that, while nationwide house value appreciation is about 34 percent, homeowners located near Trader Joe’s have seen an average increase in home value of 40 percent.[1]

While Whole Foods and Trader Joe’s in particular have attracted the most attention on this topic, it is necessary to note that general-market supermarkets have a similar positive influence on neighborhood real estate. In 2006, The Reinvestment Fund worked with Econsult Corporation to study the impact of new supermarket developments on their communities. Using a time-series analysis, the study showed that properties in Philadelphia near a new supermarket gain an estimated 4 to 7 percent in property value following a supermarket opening.[2] Often, neighborhoods with no grocery stores are considered less desirable places to live, so the introduction of a full-service grocery store can be a powerful, positive signal for neighborhood growth.

In 2014, ESI worked with The Food Trust to develop a property value analysis of their Healthy Corner Store Initiative, a citywide plan to improve small neighborhood corner stores. Many of the stores selected by The Food Trust were located in “food deserts,” meaning residents were not within walking distance of fresh food (prior to the improvements made by The Food Trust). Each “Fresh Corner conversion” represented not only the addition of an aesthetically pleasing influence on a neighborhood, but it allowed nearby residents to shop more health consciously. The purpose of our report was to quantify the overall effects that these conversions had on the neighborhood by evaluating the change in housing values before and after The Food Trust’s efforts.

Our regression analysis focused on four specific corner stores in a variety of neighborhoods across Philadelphia that were converted by The Food Trust, as shown in Figure 1. To accurately analyze the change in housing prices over time, we included all home sales that took place in the neighborhood surrounding the selected corner stores[3] between 2008 and 2014. The hedonic regression allowed for a comparison of home sales made “near” and “not near” a store,[4] while controlling for other potentially explanatory variables, such as the characteristics of the house itself and the neighborhood for which it was in.

In order to capture a change in housing prices over time, we compared homes sales made before the “Fresh Corner conversions” took place to those made after.  The infrastructural improvements, necessary employee training, and overall expansion of these four corner stores was completed by August 2013. With all else equal, homes sales made near a corner store after August 2013 sold at a price that was 19.5 percent higher than homes sold near a corner store prior to August 2013.

A deeper dive into the regression results shows a steady increase in the predicted values of homes near one of the four selected grocery stores. Figure 2 shows the regression results as predicted values of the natural log of price from 2008 to 2014 for all houses near one of the four corner stores. The graph suggests that house values began to increase at the start of 2012. House prices likely rose prior to completion of the conversions as a result of overall neighborhood improvement involved in the early stages of the Healthy Corner Store Initiative.[5] Following the completion of The Food Trust’s work, home values continued to increase, indicating continued growth for the neighborhoods. 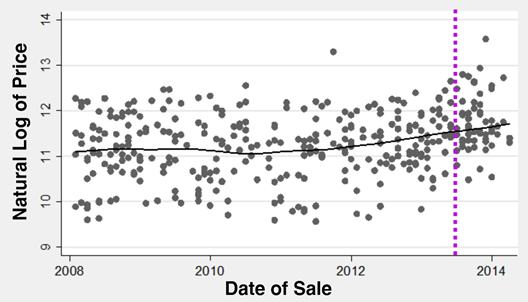 It is worth noting that the results of the regression indicated that, with all else being equal, homes near a corner store sold at a value that was, on average over the full six year period, 18.3 percent less than comparable homes in the selected tracts that were not near a corner store. This may suggest that The Food Trust selected lower income areas to renovate.

The fact that these small corner store improvements can significantly increase the values of surrounding properties suggests that additional interventions of this type could have a similar positive impact on neighborhoods, which is why the creation of the National Healthy Corner Store Network is a step in the right direction. By connecting community members, nonprofits, advocacy groups, and local policy makers, the National Healthy Corner Store Network aims to provide resources and guidance for small food retailers in underserved communities across the country.

In addition to being a powerful tool for enhancing neighborhoods and stabilizing property values, new corner stores can help tackle social and nutritional issues. Now, residents in the neighborhoods surrounding these improved corner stores have the accessibility to fresh vegetables, nutrient-rich foods, and most importantly, high-quality apples.

[1] However, the report cautions that correlation may not directly suggest causation, as many additional neighborhood changes and housing characteristics are likely to affect the value of residential homes across the country.

[2] Econsult Corporation, 2006. The Economic Impact of Supermarkets on Their Surrounding Communities.

[3] “Neighborhood surrounding” was defined as all census tracts that were within one-eighth of a mile of a corner store.

[4] “Near” was defined as any home within one-eighth of a mile of a store.

[5] Food Trust had worked with these sites prior to the beginning of the “Fresh Corner conversion” work.

Wealth and Asset Management 4.0: Expert Views on Preparing for a New Era
Share This