This week in Present Value, we highlight one of the many case studies included in our recently released study, Building a Hyperconnected City. This week, we dive into Georgia Power expanding the state’s smart LED lighting network.

One of the core foundational elements for many cities looking to transition into a smart city is the incorporation of hyperconnected streetlights. These streetlights are equipped with LED lights having the ability to communicate through a centralized network, allowing cities to monitor the individual characteristics (luminosity, color, energy usage) of each lamp, leading to major energy costs savings. More than this, hyperconnected streetlights serve as the backbone of smart city infrastructure, providing the base infrastructure for 5G and IoT technologies.

Georgia Power is the primary provider of electricity in the state of Georgia and has the largest penetration of LEDs of any utility company in the world. Altogether, Georgia Power operates a system of nearly 500,000 LEDs, of which 300,000 are connected to an internal control system.

The internal controls allow Georgia Power to monitor each individual LED, providing the company with precise readings of different characteristics of each diode, including luminosity and color. These smart streetlights also have the ability to auto-adjust their energy usage through integrated motion sensors.

Beyond providing advanced lighting capabilities, hyperconnected streetlights work well in conjunction with other technologies because the lighting system is already centrally connected. This allows each streetlight to act as a type of mount for an array of different hyperconnected peripheral attachments such as 5G antennas, motion and environmental sensors, and integrated camera surveillance and monitoring systems.

Justin Harmond, the Operations Manager of Lighting & Smart Services at Georgia Power, emphasizes the importance of working towards a hyperconnected system, explaining “We’ve been in the smart city space for a long time now, just with the connected lighting. That’s the baseline for a smart city.”

More Than Just a Lightbulb

Georgia Power’s connected system of streetlights allows various municipal governments throughout the state to establish core smart city functionalities. The linkage of the streetlights to a central system allows Georgia Power to immediately diagnose and respond to a problem any individual unit might have. 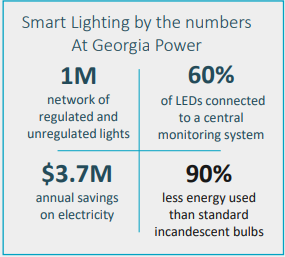 Georgia Power acts as the real estate agent for their poles allowing telecoms to install 4G and 5G infrastructure, thereby providing the backbone for an array of smart city technologies. SiteView, a camera system that can be embedded into the streetlight, allows municipalities to monitor and detect crime. Georgia Power plans to include intelligent nodes in their poles which would help to provide a variety of services including real-time emergency response relay, collection of traffic pattern data for transportation planners, and provision of smart parking functionality through a consumer app.

Harmond explains that while switching from incandescent bulbs to LEDs saves money on energy costs, the increased capital costs largely offset those savings. However, since Georgia Power’s LEDs are connected, the utility can closely monitor each set of diodes and quickly diagnose any problems as they arise. Knowing the exact location of each of its connected LEDs, and having the ability to monitor each set of LEDs in the system gives Georgia Power nearly complete control of asset management. Harmond provides an example: “Say a car hits a pole in the middle of the night, a distribution crew could change it out and not put the light back up. We would then be billing [the city] for more lights than they have. Thanks to connected lighting, we now know when lights are not reporting back in so we can reduce billing errors which were previously caught by inspections. We also know exactly where every light is so these costly inspections have been drastically reduced.” In this way, smart streetlights not only increase energy efficiency and enable future technology deployment, and they also create management efficiencies for the utility and city alike.

For access to the entire ebook and additional case studies from our study, Building a Hyperconnected City, please click here.