While the public policy conversation in recent weeks has understandably been focused on the health and economic implications of the current crisis, it is also necessary to maintain a long-term view. This is particularly true with infrastructure investments, where the decisions made today will have impacts on our economy and way of life for years to come.

Infrastructure is a descriptive and over-used phrase for the roads, bridges, railroads, transit, airports, and port facilities that serve the nation’s communities and employment centers. (Infrastructure is sometimes also used to describe other systems, like cultural, health, or educational infrastructure.) The surface transportation components (roads, bridges, rail, and transit) are essential aspects of our quality of life and economic well-being. Twenty years ago, the beginning of an infrastructure presentation had to include a definition of what and why it was going to be discussed. Today the public and elected officials have a greater understanding of what surface transportation infrastructure is; the dilemma, however, remains: what to do about it?

Seemingly the high-level purposes and goals of surface transportation infrastructure should provide the basis for strong policy support, as well as sufficient funding for maintenance, rehabilitation, and expansion of these systems. In reality, consistency of support for funding, policies and new programs is often lacking, curbed by philosophical, political, and public acceptance differences. Consensus on a way forward is attainable but has not always been achieved.

Consequences of Lack of Consensus

There are costs for this lack of consensus: the “3 Ds” (defer, delay, defeat); deteriorating conditions on roads and bridges; declining rail and transit facilities and services; and economic costs due to growing congestion and inadequate capacity to meet new developmental and economic redevelopment needs. National surveys of transportation infrastructure conditions usually rate the United States’ roads, bridges, and transit facilities in the “C” or “D” range, meaning that many are in poor condition. Calls for action, legislative initiatives, and new approaches to raise the ratings usually follow. What is the result? Lack of political will and bipartisan agreement on needed funding programs and priorities are the usual stumbling blocks.

At the federal level, a multi-billion-dollar infrastructure package was proposed three years ago. While annual appropriation bills and funding have continued to be passed, in accordance with the Surface Transportation Act, there has been no action on a comprehensive, major new program. This dilemma was recently demonstrated when President Donald Trump suggested possible funding for infrastructure in the next economic stimulus bill, and the idea being immediately shot down by Senate Majority Leader Mitch McConnell. Competing priorities and partisan differences have blocked moving forward. Given the pending election, this gridlock is likely to continue until at least 2021.

Initiatives at the State, Regional, and Local Level

Across the nation at the state level, much has been accomplished through local initiatives, voter referenda, and bi-partisan programs. Pennsylvania is working hard to develop a new funding program that will deal with the Turnpike Commission, PennDOT, public transit agencies, like SEPTA, and the PA State Police. Recently, various state legislators have also introduced bills to deal with the transportation funding issues. Optimistically, this program may be in place by next year.

Locally, regional elected officials and representatives from other stakeholders are also discussing financing options. Such funding can provide support for local improvements and matching funds for PennDOT- and US DOT-funded projects.

Municipalities can also help to improve transportation facilities and services through their maintenance funds and support for capital projects. They can also work with developers to provide enhanced highway access and transit-oriented development around rail and transit stations. Selective density increases and innovative street design to safely accommodate bikes and pedestrians are other aspects of their contribution, using zoning and subdivision ordinances.

All of these initiatives need to be consistent with the Delaware Valley Regional Planning Commission’s Regional Long-Range Plan & Transportation Improvement Program, as well as county and local comprehensive plans. These plans provide the policy and technical basis for surface transportation projects and their programming on regional and state capital improvement programs.

These actions on multiple fronts are encouraging. Whether Washington “gets its act together” sooner or later, I am optimistic that Pennsylvania’s partners will implement a solid program to achieve an improved surface transportation infrastructure network in the near future. 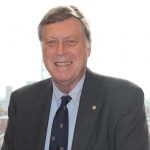 Richard G. Bickel, FAICP, is a Senior Advisor with Econsult Solutions. He has been a practicing professional planner for 45 years and is a Fellow of the American Institute of Certified Planners. Mr. Bickel’s focus area has been transportation, serving on the Montgomery County, PA Planning Commission, the Delaware Valley Regional Planning Commission (DVRPC), and for Southeastern Pennsylvania Transportation Authority. At DVRPC he fostered support for Transit Oriented Development and was the principal drafter of Pennsylvania’s Transit Revitalization Investment District (TRID) Act in 2004.

Public Transportation is Needed to Maintain an Equitable City
Share This