For a small economics company, ESI appears to have a high number of cyclists and, unsurprisingly, a high number of data geeks. Personally, I am also married to a cycling data geek. So when my husband Frank learned that Indego has a good chunk of it’s ride data online, encouraging people to “Toss it, flip it, turn it inside out, combine it with your own or someone else’s data!”, he said, let’s do this. So along with the help of senior research analyst, Jing Liu, we tossed the Indego data. We will save the flipping it, turning it inside out, and combining it with other data for a later Present Value post.

While preparing this post, we found that in November 2016, Melissa Romero at Curbed Philadelphia published Mike Reeser’s use of Tableau showing Indego data in an interactive format. What we have done does not explore the data to that breadth, but between Frank’s data manipulation and Jing’s use of Tableau, we hope we can provide some more insight into Indego and its users from its beginning in April 2015 to December 2017. 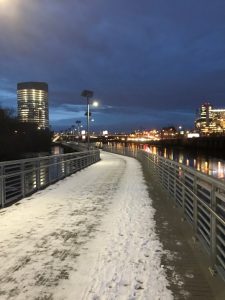 Indego usage has steadily increased since it launched and we see seasonal trends in riding as well. The number of riders increase in the warmer months as does the proportion of rides by single-use riders (defined here as riders who purchase single rides or one or two day passes as opposed to riders with passes that allow for unlimited rides each month.) Overall, the proportion of rides by unlimited monthly riders has increased and as stated, is also seasonal. For instance, in December 2017, unlimited monthly riders accounted for 94 percent of rides, most likely because the majority of potential single-use riders don’t say, “Hey, this frigid December day seems great for a leisurely bike ride.” 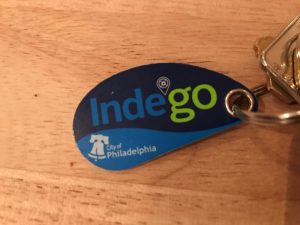 Next we looked at rides by station through December 2017. To note here, some stations have been removed from service and others have been introduced since Indego’s 2015 start, so when accounting for rides in all three years, these specific stations won’t have as much representation as stations that have been in existence throughout the life of Indego.

The most used bike dock station (rides beginning and/or ending at a bike dock station) is Rittenhouse Square with over 144,000 rides (147 rides per day), which is 28 percent more rides than the next most popular station, which is 15th & Spruce with 115,000 rides. What we found more interesting though was looking at station pairs and directional rides. The top paired stations are University City (at 3051 South Street) and 23rd & South with 10,758 trips. Directionally, the ride from University City to 23rd & South is the second most ridden route on Indego, specifically during the afternoon commute. It’s reverse, during the morning commute, is the fourth most ridden route.

The next top paired stations are in fact the Art Museum with itself. It has the highest number of round trip rides in the Indego system (more than 10,000), which makes sense given its tourist location and proximity to both sides of the Schuylkill River Trail and the Schuylkill Banks.

Rides by Day of the Week and Rider Type

The Future of Indego

The City recently issued a request for proposals to evaluate the future of Indego, including the potential introduction of dockless bikes and electric assisted bikes (e-bikes). With LaSalle University’s pilot launch of Spin dockless bikes and Camden’s pilot launch of Ofo dockless bikes, change is on the horizon for Philadelphia’s bike share system, what that looks like remains to be seen. For now, Frank, Jing and I will continue to flip, toss and turn the data and see what other tidbits we can learn about the system and its riders.

Andrea Mannino is a director at ESI where she leads projects on economic development and market studies for both market rate developments and affordable housing. Prior to joining ESI, Ms. Mannino worked at the Department of Revenue, City of Philadelphia, as the Special Assistant to the Revenue Commissioner.

Jing Liu is a senior research analyst at Econsult Solutions. She specializes in spatial analysis, quantitative analysis, and data visualization. Prior to joining ESI in 2016, Jing received her Master’s in City Planning and Urban Spatial Analytics from the University of Pennsylvania.

Frank Mannino, Ph.D. is a Director of Clinical Statistics at GlaxoSmithKline.