Learning from Las Vegas: An Innovative Approach to Partnering Through Pilots

Instead of issuing traditional RFPs, Las Vegas has established a pilot system in which companies work with the city to develop products that meet its needs. An innovation district in the downtown area serves as a testing ground for these projects. By establishing a working relationship early in the process, the municipality and participating companies jointly benefit from a product that ultimately serves the needs of both and offers new approaches to universal problems. 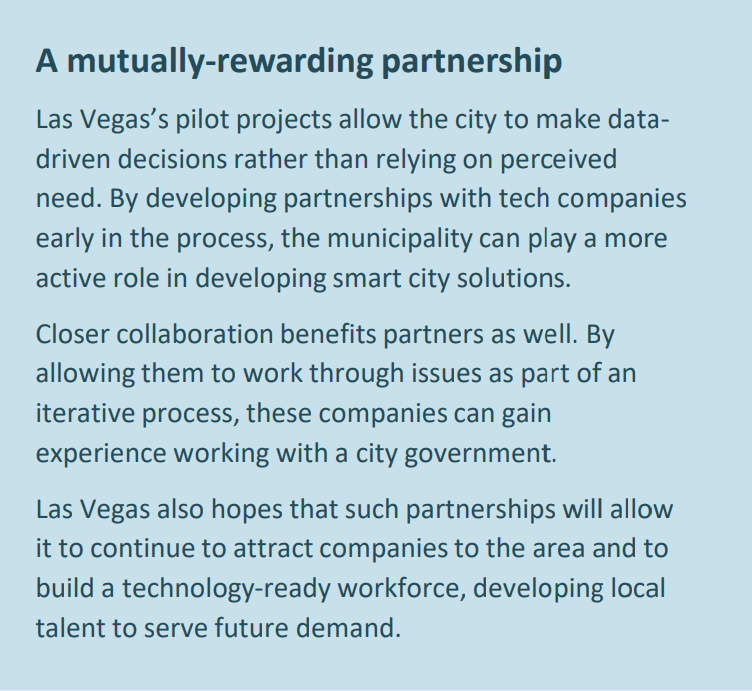 Traditional park patrol models are based on the idea that random patrol schedules deter criminal activity by making it difficult for wrongdoers to predict where and when patrols will take place. While this is the case, data about which parks are most actively used will help the parks’ agency maintain a stronger, more targeted presence at those locations, rather than expending resources at parks that are less frequently visited.

Remote optical and auditory sensors allow officers to monitor multiple locations simultaneously, rather than having to follow a typical random patrol model. In addition to its safety benefits to the public and to officers, this system can support park maintenance by identifying areas of attention for trash removal and facility cleaning, based on which sites are mostly actively used and when.

To ensure data privacy and develop a more complete picture of conditions, the pilot program is experimenting with infrared technology (rather than traditional imaging) as well as sound monitors to detect elevated voices, glass breakage, and potential gunshots. 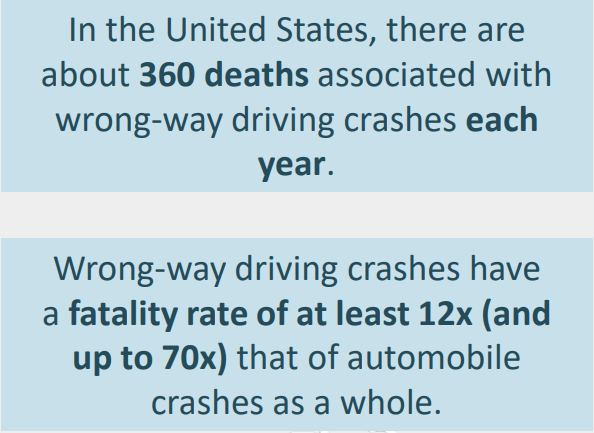 Rather than investing in safety improvements only after collisions have occurred, Las Vegas has deployed a driving detection pilot that collects information about near collisions associated with wrong-way driving. It then can proactively invest in interventions that will discourage this behavior.

Launched in August 2019 through a partnership with NTT and Dell, this pilot program has already revealed higher levels of wrong-way driving than was anticipated, with incidents reaching 30 to 40 cars per week. This has led to a decision to increase signage on one-way streets as an initial measure, one that has made a difference but not resolved the problem entirely.

Because the technology in place uses sensors to capture more detailed information than has been available in the past, the city can make changes to prevent traffic accidents before they occur, including signage, road striping, and signalized intersections. As it continues to collect data, the municipality will be able to learn more about which types of intervention are the most effective in preventing wrong-way driving.

Wrong-way driving is of particular concern because it is associated with much higher fatality rates than crashes as a whole. In addition, 60% of wrong-way drivers involved in fatal collisions show signs of alcohol impairment, either through testing of blood alcohol levels or officer assessment. The avoidance of even one of these fatal crashes can generate the following savings:

and most importantly, the loss of a life, aggregating to total of nearly $1.4 million in costs to society.

“You’re making capital purchase decisions based on actionable data, not on a gut feel, not because you just had one accident last week, but based on a multitude of data that you’ve collected to make a solid decision.”