Mapping the Affordability in Philadelphia

By many measures, Philadelphia is one of the most affordable housing markets on the East Coast.  The 2017 Bloomberg Global City Housing Affordability Index ranked Philadelphia as the second most affordable city to buy or rent a house in the U.S., just behind Houston. For this month’s look at the Philadelphia Housing Index (PHI), we wanted to see just how much affordable housing there is in the city. Our analysis shows that the city has a large inventory of homes that fit traditional standards of affordability. Using the PHI, we can begin to look at the spatial distribution of affordable housing stock and the house price changes in the same neighborhoods facing affordability issues. We found that 46 percent of the city’s single-family housing stock is affordable to households making as little as $30,000 a year, and 84 percent of the city’s inventory of single-family houses is affordable to households earning $60,000 or more a year. For this analysis, we define housing as affordable to a household if the annual cost of the housing is less than or equal to 31 percent of annual household income. By using assumptions of 3.5 percent down payment, 3.75 percent principal and interest, 1.4 percent property tax, 0.7 percent private mortgage insurance and 1.0 percent homeowner insurance, we calculated the affordable house prices for each income level (see the table below). For example, based on these assumptions, a household with an income of $30,000 can afford a home that costs $108,965.

We mapped affordable housing for different income levels by looking at the most recent property assessment data from Philadelphia’s Office of Property Assessment (OPA), filtered for single-family houses with assessed value from $1,000 to $5 million, and whose exterior conditions are newly constructed or rehabbed, above average, average, or below average (eliminating vacant and sealed or structurally compromised houses). We understand that these classifications will not be wholly accurate, but give us an estimate of how many single-family homes are within the affordability range listed above. In addition, we can see that based on the affordability criteria that we described, more than 46 percent of all the single-family houses in Philadelphia are affordable for households earning $30,000 annually.

From the map we can see that most parts of the city have affordable houses.  The most affordable housing stock (as assessed by the OPA) are concentrated in neighborhoods of North and West Philadelphia, such as Tioga, Hunting Park, Strawberry Mansion, and Kingsessing. Neighborhoods in the Lower Northeast, like Tacony and Frankford also have their share of affordably priced homes. 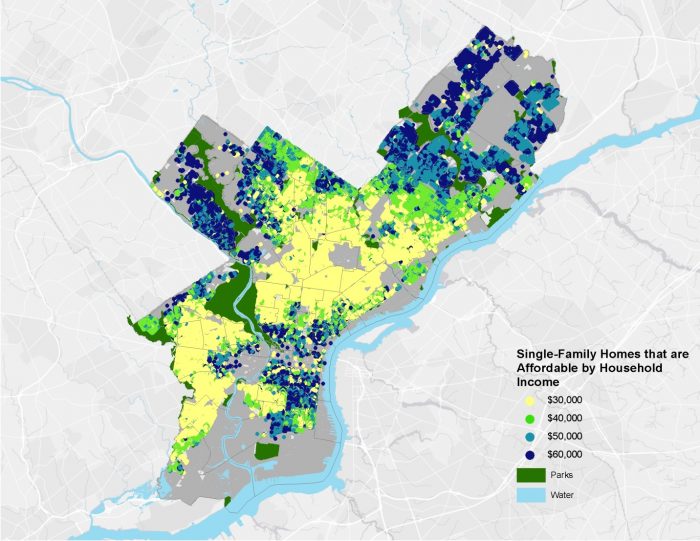 Looking at OPA data should give us an accurate picture of the home price landscape, but nothing beats on-the-ground, recent transaction data. What does the PHI show? We charted some select neighborhoods’ housing price indices between 2001 and now, which shows the predicted price of a Philadelphia home in these neighborhoods, adjusting for seasonality. You can also take a more granular look at the raw home sales in these neighborhoods as well. We can see the house prices in these neighborhoods are significantly lower than the city average, meeting the affordability criteria laid out at the beginning of our post, and most of them are more affordable than they were in 2007 although they have been continuously increasing since 2011.

Our takeaways from this exercise?