Many news sources are showing that home construction started to slow down nationally at the end of 2018, with single-family permits dropping by 6.7 percent. With that in mind, we wanted to see how Philadelphia’s construction activity compared year-over-year, and also how it was fairing early on in 2019. Last year, we took some time to look at development patterns across Philadelphia via the Licenses and Inspection (L&I) building permits for new construction and renovations. We took a similar approach to that analysis to get a view on the overall development volume and to see what neighborhoods we should keep an eye on in the coming year.

Based on L&I data, Philadelphia’s construction activity topped out at the end of 2018 at more than 59,000 construction or renovation permits, showing 3.7 percent growth over the previous year. That represents a slower acceleration of permits pulled year-over-year compared with 2015, 2016, and 2017, but nonetheless shows a market that is still growing. 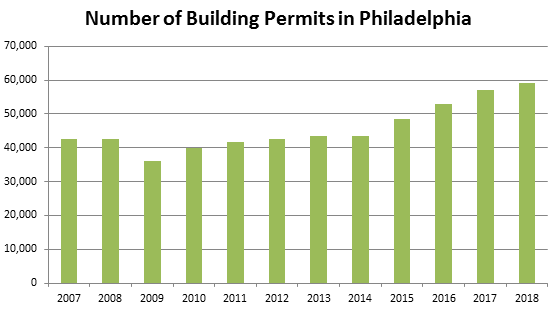 While it’s still early in 2019, we then looked at how the year’s L&I permitting activity stacks up compared to the same time in the past years. There is certainly some seasonality to new construction starts, but looking at just the first months of the year can provide some insights into what may come. As of the end of February, citywide L&I permits this year are nearly at 12,000, representing 15 percent year-over-year growth compared to the same time frame in 2018. At the neighborhood level, there are a few interesting trends to note—especially among some neighborhoods beyond the outer ring of Center City that we have tracked to varying degrees in our Present Value blog over the last year. Neighborhoods like West Kensington, Hartranft, and Allegheny West have all seen significant increases in permitting activity as of the start of the year; perhaps a sign of expansion in the years to come if the market stays steady.

To use the interactive chart on Tableau of the January & February Permit Percent Change, please click here. 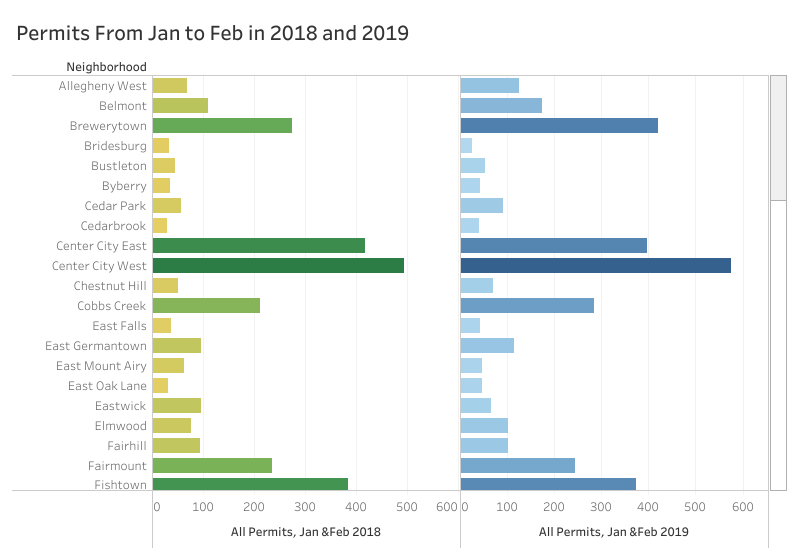 West Kensington has already had 240 permits pulled for construction in the last two months—not nearly the volume of Center City, South Philly, or Brewerytown; but that volume is outpacing by double the activity that occurred there in the last year. Housing prices for this particular neighborhood have seen a neighborhood premium of 19% compared to the city average. This isn’t nearly as steep of a premium as some other surrounding neighborhoods like Kensington and Fishtown, but it shows an upward trajectory as only two years ago the neighborhood premium was at -1%.

The other neighborhoods we mentioned as having notable increases in the number of permits issued in the first few months of 2019—Hartranft and Allegheny West—are interesting in that their neighborhood premier are still well below the city average (-23% and -62%, respectively), but both have recorded substantially more construction permits than most neighborhoods outside of Center City. While not single family housing specifically, promising projects like 10 North Station represent a potentially transformational development for the Allegheny West neighborhood, which would ultimately be reflected in future gains in home values in the area surrounding that station.

View the Philadelphia Housing Index to measure changes in the sales prices of Philadelphia housing units through time by neighborhood by clicking here.

What does the rest of 2019 hold for the PHI? We anticipate more outer neighborhood development like the examples we’ve mentioned here dominating the headlines. As the available and vacant land in popular neighborhoods like Fishtown and Point Breeze are filling in, they are leaving less room for the high returns developers have historically seen on their investments.