If you’ve been following our Philadelphia Housing Index (PHI) posts, you may have noticed one neighborhood we have not spent a lot of time talking about has been Brewerytown. But in the last 2 years, this neighborhood has seen a significant rise in its PHI and growth in the home sales activity that it’s worth a blog post to cover.

Through early 2017, this neighborhood’s Index tracked with the city’s average or below, but since then, Brewerytown has seen a significant growth in the median sales price and our predicted home price (the PHI), now outpacing the city average and many neighborhoods around it. The July PHI for the neighborhood reached a new high point of around $213,400, which reflects an increase of more than 83% compared to July 2016. Brewerytown’s index remained stable in August ($213,250).  In addition to the PHI growth, single family home transactions for the first 7 months of this year continue to outpace the past few years (2019 has posted 14 percent more sales than this same time last year), despite expectations that the housing market would be slowing in 2019. In comparison, the city’s PHI  was around $127,000 in July 2019, and recorded 11,389 transactions to date (6% more than the year before).

Two neighborhoods we’re also watching closely, Strawberry Mansion and the neighborhood around the North Philadelphia Station, are behind Brewerytown in terms of redevelopment, but have similar pressure as developers look for neighborhoods with available parcels and older buildings at a lower cost. Similar to Brewerytown, Strawberry Mansion also saw steady increases in their PHI since 2016, until the decrease in the second half year of 2018. North Central and Allegheny West are the two neighborhoods near the intersection of the North Philadelphia Station; they cover a variety of smaller communities with a lot of older housing stock that has not seen recent reinvestment; however the promise of the station’s redevelopment could soon transform that area. The plan includes a seven-story residential building with 135 dwelling units and ground-floor retail, a retail building along the rail tracks south of the residential mid-rise, the transformation of an 180,000-square-foot derelict industrial building to the west into work spaces, and improved connections to the historic Amtrak station building.

These three nearby neighborhoods saw an increase in the predicted home price since the beginning of 2019. The PHI for both Strawberry Mansion and North Central peaked in June ($54,700 and $76,400 respectively), and PHI in Allegheny West reached its high of around $56,500 in May.  Another indicator of strong market activity, the volume of single family home transactions, is also notable:  transaction activity over the first 7 months of the year has increased in both Strawberry Mansion (15% ) and Allegheny West(32%) compared with the same time frame in 2018. The statistics show that the neighborhoods still lag behind Philadelphia in terms of predicted home price, but have strong market activity that indicate a neighborhoods on the edge of revitalization. 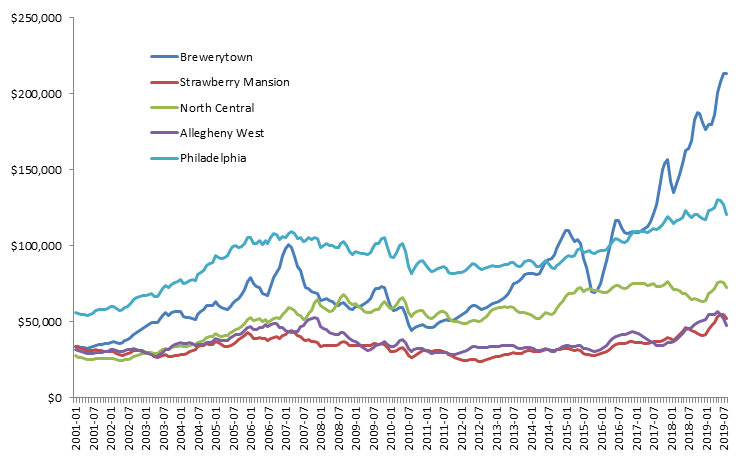 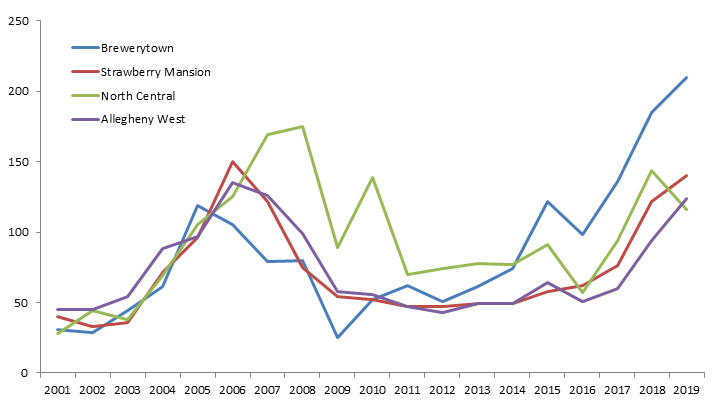