Behind the Scenes of Game On Philly!

Over the past year, Econsult Solutions has been fortunate to have the opportunity to work with the Philadelphia Youth Sports Collaborative (PYSC) to support the Philadelphia Task Force on Sports Based Youth Development. The Task Force, chaired by David Montgomery of the Phillies, City Managing Director Michael DiBerardinis, and City Chief Education Officer Otis Hackney, released a report on Wednesday that puts forward a set of strategic recommendations designed to help every young person in the City to have an opportunity to participate in sports-based youth development programs that blend sports with positive life-skill development.  With the report’s release, PYSC is launching the Game On Philly! campaign, which will put the recommendations into action.

Process as a Product 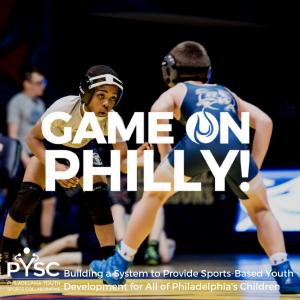 So how did we get to this point? Sometimes it can seem as if the reports and recommendations of task forces like the one PYSC organized just materialize overnight – but the reality is far different. Process is a product for this type of project. Successful task force efforts require leadership, planning, commitment, and follow-through on the findings and recommendations that emerge. Let’s take a look behind the scenes at how PYSC (with assistance from ESI) put this task force together and then pulled the work together to get to Wednesday ’s exciting launch event.

Leadership – About a decade ago, the leaders of Philadelphia’s sports based youth development (SBYD) organizations (non-profit providers of out of school programs that combine sports activity and training with academic, leadership and life-skills engagement) created the PYSC, to provide a venue where these organizations could learn from each other, develop shared resources and programming, and work together to grow the sector. After beginning as a program at Penn, PYSC became an independent non-profit and hired Beth Devine as its Executive Director.

With the support of her Board of Directors, Beth began looking for ways to grow the impact of SBYD organizations, with the ultimate goal of providing access to SBYD for all young people in Philadelphia. After a series of discussions with her members and community leaders, Devine and PYSC decided to bring together a cross-sector group of leaders in a task force to develop recommendations for growing SBYD in Philadelphia. Recognizing that they would still need to run the Collaborative while also executing the Task Force process, they engaged ESI to help plan and facilitate the task force and related activities.

PYSC’s staff and board worked quickly to identify a great set of co-chairs – Montgomery, DiBerardinis and Hackney – to provide outside leadership for the task force, and to also help in attracting other leaders as participants. Over 30 additional leaders from government, education, business, and leading non-profit institutions were invited to participate in a first-of-its kind effort.

Planning – While putting the task force together, PYSC worked with ESI to plan out the process that the task force would follow. The planning for a task force is perhaps the most underrated element of the process. The key is often to start with the end – where do we want to be at the conclusion of the task force, and then we can plan the activities to help us get to that desired outcome. Our goal was to have a set of recommendations that would emerge from the task force process that would provide a path to dramatically increasing the number of children participating in SBYD programs in Philadelphia.

With that as the goal, we set out a plan of four task force meetings, supplemented by separate committee and working group meetings. It didn’t all go as we originally planned, but we were able to adjust our plans to both meet the skills of the task force and committee members, and to adjust to what we were learning and hearing from the task force.

Commitment – What was truly amazing in working with the task force and those who also participated in committees and working groups was their commitment to the end goal, and how they were able to work together to develop the recommendations that will drive this effort. We learned so much about what was already going on, how that work could contribute to this effort, and where new ideas were needed. What was important was recognizing that we didn’t need to reinvent the wheel for everything, but that the key was going to be having an organization like PYSC in a backbone role to coordinate efforts and keep eyes focused on our ultimate goal of providing high-quality SBYD for as many kids as possible in as many neighborhoods and schools as possible.

We also saw in action the new partnership between the City and School District. There are opportunities for leveraging cooperative efforts to better utilize fields and gyms, parks and open spaces to provide more kids with opportunities to play and learn. We also identified a common interest in focusing on the middle school age group – that important time in life when making the right decisions can put a kid on the path to success in life. While there is still a lot of work required making these partnerships work, there is clearly a commitment on both sides to put the kids first and make things happen.

Follow-Through – With the launch of the report, the hard work begins. Following through on the recommendations and continuing the momentum of the Task Force will be the final determinant of the success of this process. The signs are promising – PYSC is launching Game On Philly! – a campaign to implement the recommendations of the Task Force report and raise the resources needed to fund pilot programs and provide the coordination and staff support needed.  Now it is time to broaden the circle, and make more people aware of the benefits of sport based youth development for our children.

What can you do?

It is time to get off the sidelines – Game On Philly!