The Impact of Race/Ethnicity and College Major on Earnings

We live in a knowledge economy where education is one of the most important factors in determining one’s future. Education incurs huge costs, both in terms of time and money, but given that an estimated 15.6 million students[1] were enrolled as undergraduates as of Spring 2016, it is an investment that many are willing and able to make. One key choice that students make in higher education that is worth close examination is their college major. The field students ultimately choose has two important and long-term functions; it confers a specialization in knowledge, skills and experience, and also signals to others what a student is capable of doing and learning to do.

As I am a current college student, it will likely come as no surprise that the choice of a college major is a topic that is never far from my mind. I have often thought about the process of choosing a major and the variety of factors that may come into play. Even after having gone through the process myself, it’s a mystery. Students enter college and are immediately bombarded with a vast array of choices and decisions, on what classes to take, what clubs to join, what people to talk to. Amidst this dizzying experience, they are expected to choose a major to study, likely from a previous class they decided to take, perhaps without having ever taken a course in that subject before. If you add in factors like core requirements and stringent major switching policies, it is truly amazing that in (more or less) four years, students are able to make a decision and fulfill the requirements necessary to get a degree!

Much as a surprise to me, having ended high school believing I would study something related to neuroscience or engineering, I decided to major in economics. When I went to my first class, I was somewhat taken aback by how the mass of students neatly slotted into the classroom seats mainly seemed to fit a single profile: white males. This was particularly true in any honors sections, where from a glance, only a sprinkle of students deviated from this profile. There are a number of predictors of college major choice: socio-economic status, academic ability, and self-perception to name just a few. It is well-documented that racial segregation in college major choice is prevalent even when controlling for other factors, in studies such as that of Leslie, McClure, & Oaxaca (1998), or more recently by Dickson (2010). A more interesting question then emerges: do racial differences in college major choice explain long-term differences in income?

The Data on Race and College Majors

So what does this mean? Certainly at first glance, there are majors that are universally popular: Business Administration, Psychology, Nursing, and Biology top each list. To see whether the top major choices had any connection to possible future earnings, I calculated mid-salary predicted overall earnings from Payscale’s College Salary Report (2015), based on the top ten majors of each race/ethnicity category, and obtained the following: 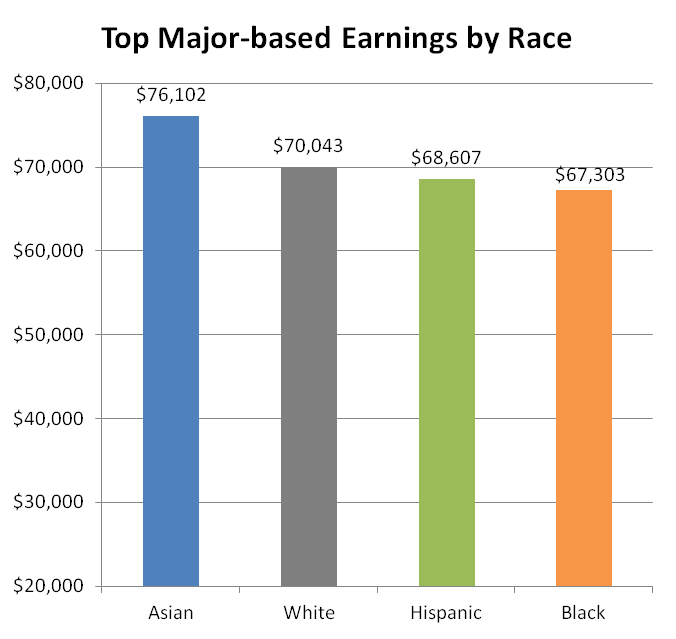 What exactly does this graph show? Certainly, it seems to indicate that between the different race/ethnicity categories, differences in major choice predict real differences in income, but this is only based off of the top 10 majors, so it is perhaps a bit too specific. I repeated the same exercise using median earnings categorized by degree field of study from the Census’s Report Field of Degree and Earnings by Selected Employment Characteristics: 2011 (Ryan 2011)[2] and a breakdown of the National Center for Education Statistics Bachelor’s Degrees Conferred by Postsecondary Institutions, by Race/Ethnicity and Field of Study (Integrated Postsecondary Education Data System 2015)[3].

Interestingly, although the income levels are slightly changed, likely due to factors associated with the two different years of data, the same predicted pattern of earnings by race emerged: 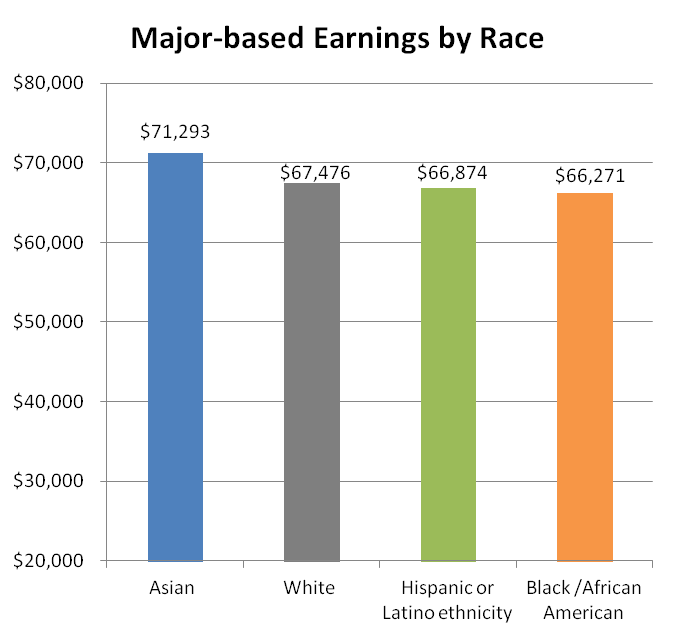 Those differences are statistically significant at the scope of Census data, but whether they are practically significant may be a different matter. It is important to keep in mind that in contrast to the previous calculations, these major categories are very broad and could mask many significant differences at a more in-depth level. However, it is apparent that both these predictions of future income show similar patterns despite the differences in methodology: to see the reality, I looked at median income for those with a bachelor’s degree or higher (Bureau of Labor Statistics, 2015)[4]: 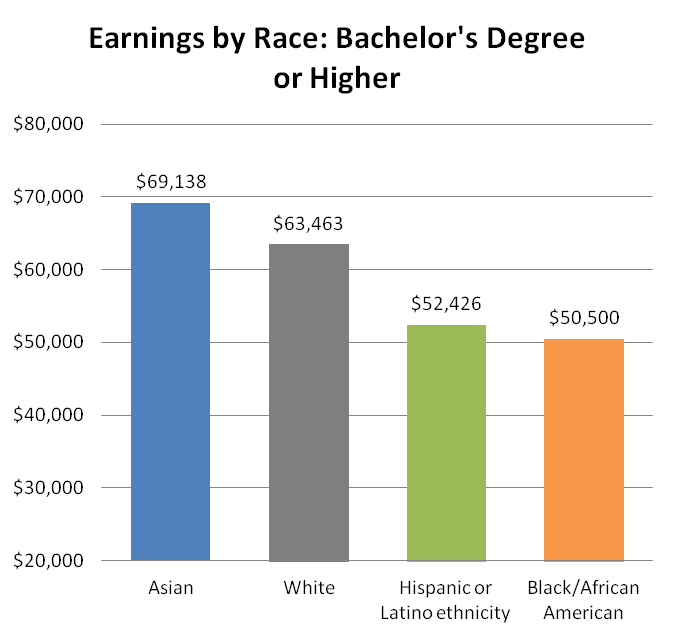 It is apparent that, once again, the same pattern emerges with median incomes by race, but here the income disparity is even more dramatic. Clearly, there are other effects aside from choice of major that are at play here. This is to be expected; in the current workplace where networking and connections are critical in job search, differences in “networking capital,” so to speak, may lead to stark differences in incomes. Hence, particularly in industries where the racial makeup is already highly segregated, the existing structure is largely preserved. Workplace discrimination, socioeconomic status, and other factors associated with race further serve to exacerbate this system, and none of these are something a disadvantaged student can choose not to encounter. Something as simple as a choice of major can by no means erases these very real sources of inequality; however, it can certainly be a tangible and significant push in the right direction. Speaking as an undergraduate student, one of the most tragic realities is when students are pushed away from a major not from lack of interest, but rather from a feeling of not fitting in or being excluded because of factors such as their race or gender, and it is one I have seen far too often. In this case, all parties lose; students are pushed out of pursuing topics that may truly interest them, and those fields are cut off from accessing the talent and resources of those students.

What Does This Mean?

Is there a solution? Perhaps not in such simple terms, but the disparity in major choice certainly provides a place to begin. Creating resources to minority groups to promote exposure to, and continued support in, traditionally high-paying and demographically homogenous majors such as engineering, mathematics, or economics could be a strong encouragement to underrepresented students to pursue fields they may otherwise never have considered. Increasing accessibility of these fields across racial boundaries is an important step in working towards undoing the perpetuation of racial income inequality.

[2] 2011 values were inflated to 2015 values to be consistent with the previous calculations.

[3] Majors broken down into broader fields:

[4] 2014 values inflated to 2015 values to be consistent with the previous calculations. Annual numbers were obtained by multiplying weekly averages by 52.

Camille Choe was previously a Research Assistant at ESI and is currently an undergraduate student in economics and psychology at the University of Chicago.