Ridesharing Makes It More Important than Ever to Support Public Transit

The burgeoning ridesharing industry has led some to argue that ridesharing is a more efficient market solution to urban travel than public transit, obviating the need for transit infrastructure investment and operating subsidies.[1] For example, Leon Drole, a recently elected commissioner in Macomb County, Michigan reacted to a proposal to invest in Detroit public transit saying “This is a 1980s proposal that will trap us…It anchors us to decades of dinosaur mass transit.” An organization dedicated to kill the same proposed tax for Detroit transit states “The proposal spends billions on old transit tech like buses and rail while other cities are contracting out transit services to Uber, Lyft, Chariot and others that provide door-to-door service at substantial savings.”[2] 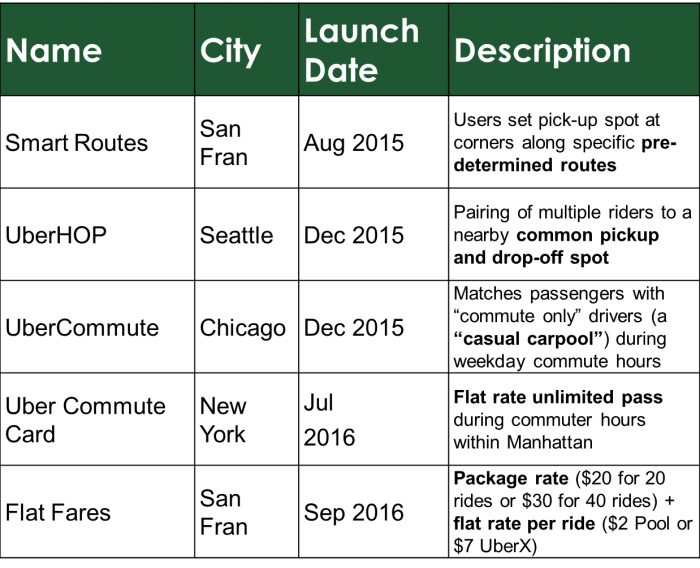 The ridesharing industry currently offers products that directly compete with the transit industry in many markets and is eagerly seeking customers that otherwise would use transit.[3] Additionally, very recent research (conducted with UBER participation) argues that there are great consumer benefits from ridesharing.[4]

Ridesharing clearly has benefits for many consumers and is here to stay, but can it fulfill the role of public transit in big cities?

The answer to this question is unequivocally no, but perhaps for a surprising reason: Ridesharing needs public transit to maintain the viability of places that it operates best.

Ridesharing is successful because transit has enabled the dense, productive and creative urban environment that allows ridesharing to provide an attractive service. 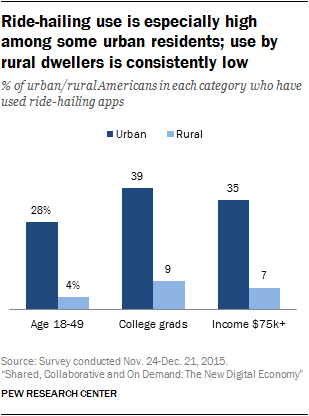 To answer the fundamental question of whether ridesharing means that public transit investments and subsidies are no longer needed, one must ask the question of what roles does transit play that warrants investment in the first place, and then determine whether the ridesharing industry fulfills those roles.

Although there are many arguments in favor of transit subsidies including positive environmental impacts, congestion reduction, access to employment and improvement to urban quality of life, one of the strongest economic arguments in favor is that transit makes dense urban “live and work” environments possible, which urban economists have long recognized are characterized by innovation and high productivity.[5] The so-called “agglomeration economies” are the result of the observation that persons of the same skill level will be more productive in a dense environment than in a less dense area. Because of the importance of agglomeration economies, cities have been the leaders in productivity and economic growth. With the exception of the severe decline in cities 1960-1995, this has been true in U.S. cities as well.

Transit is a technology that is fundamentally well suited to the development and sustainability of high density cities. Cars, especially single occupancy vehicles are not — land intensive for roads and parking.  Land intensive, congestible transportation undermines agglomeration externalities. In an old paper focused on transit and parking, I show that central business districts grow and maximize property values by taxing parking and subsidizing transit.[6] The same arguments are applicable to ridesharing and transit. The rise of ridesharing will increase the desired level of transit subsidies.

Ridesharing, in many ways is an improvement over single-occupancy vehicles (SOVs). It is less land intensive and hence more pro density than SOVs. Additionally, ride sharing provides another option for urban travel and, up to a point, ridesharing quality improves with density as more wait times for a rideshare falls and opportunities for pooling increase.

However, cars, even with ridesharing, cannot support the volume of urban travel that rail and bus transit can. Ridesharing alone simply can’t deliver the vast number of people to dense urban centers that transit can. Thus it simply cannot generate the agglomeration externalities.

Unfortunately ridesharing also creates competitive landscape that challenges the economic viability of public transit, which overtime could undermine the fabric of the city that is necessary for the success of both ridesharing and transit.

Just as transit is necessary for high density cities, only cities that are dense can support high quality transit services. The transit industry is characterized by three key features:

Ridesharing has less upside from a virtuous cycle. Increasing ridesharing use will improve quality (shorter waits) up to a point, but then will degrade quality as congestion increases. If ridesharing results in transit service reductions, congestion may increase even more, further eroding the quality of both ridesharing and bus service. As transit quality falls and congestion increases, property values and investment in urban centers will fall, ultimately undermining density and agglomeration creating a vicious cycle of decline for the city. The potentially worst impacts of the decline will be on the lower income people who can’t afford ridesharing, loose transit service and loose access to jobs that are leaving the city.  Low/moderate city and suburban dwellers will be further adversely affected by declining productivity and employment as the city and region becomes less competitive.

How important is the potential negative impact of ridesharing on agglomeration? Part of the answer to this question will depend on whether ridesharing is taxed and regulated. As long as there is some excess capacity on local roads ridesharing may offer an important travel option, and in fact increase the overall capacity for density. However, if ridesharing either results in significant increases in congestion or generates its users from former transit system riders, the adverse effects of ridesharing on the health and productivity of the city could be large. As a consequence, there is likely an optimal level of ridesharing that should be encouraged. Moreover, because of economies of scale and increasing returns to transit, it is highly likely that subsidies to transit should be increased rather than decreased to assure that there is an efficient density in the city.

Richard Voith is a President and Principal at Econsult Solutions, and is the current Chair of the Delaware Valley Chapter of the Counselors of Real Estate. He is a well-known expert in transportation and applied economics. He is also a board member of PENTRANS and Philadelphia Youth Basketball.