The Role of Cities in Growing the Renewable Energy Market

Despite the tumultuous past two years, local governments in the US bought more renewable energy in 2020 than ever before. There was a 23 percent increase from 2019 as nearly 100 cities and counties completed 143 deals and added more than 3,600 megawatts of renewable energy capacity.

On a larger scale, according to CDP, over 100 cities now get at least 70% of their electricity from renewable sources (i.e. hydro, geothermal, solar, and wind). That’s up from 42 cities in 2015, when countries pledged to cut gas emissions in the Paris Climate Agreement. Cities like Burlington, Vermont are showing what it looks like for a city to run on 100% renewable electricity. Burlington is leading the way to building a zero-carbon future in various ways like investing in charging stations for EVs and planting more trees in urban areas.

California and Texas Leading the Charge

In 2020, Houston and Los Angeles signed the largest US city renewable energy deal, ever. According to World Resources Institute, California and Texas accounted for 84% of the total renewable energy purchased by cities between 2015 and 2020. While those 2 states are leading the charge in the US, a lot of progress is being made in other areas as well through community solar projects in Minnesota, Massachusetts, and Washington. 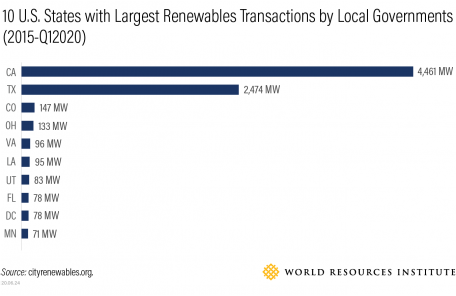 Some city and governments are establishing public-private partnerships with other local institutions to buy clean electricity. One example of this includes the City of Nashville partnering with Vanderbilt University to join the Tennessee Valley Authority’s green tariff program, to construct 100 megawatts of solar power energy to help mitigate climate change. By teaming together, the City and Vanderbilt were able to support each other through the procurement process and leverage their collective buying power to help efficiently meet climate goals. 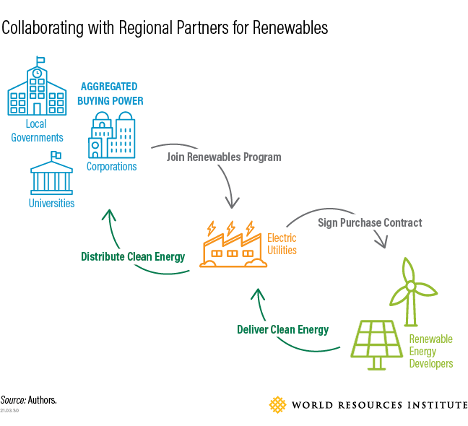 Governments and cities have purchased solar energy the most between 2015 and the beginning of 2020, with solar accounting for 89% of the total renewable deals purchased by local governments. While the amount of solar energy a city gets varies by its location and weather, it’s the best suited source for both large and small projects and is distributed across the US more than other renewable energy sources. Wind follows behind solar, having a stronger presence in the South and Midwest. 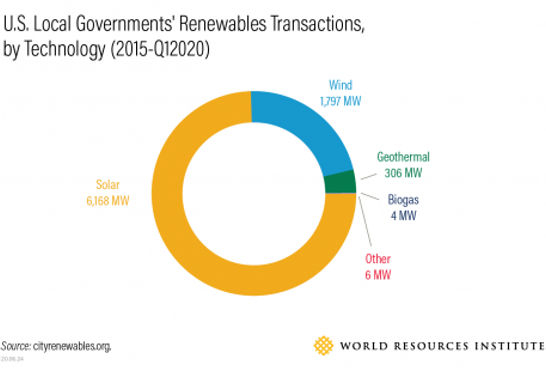 As renewable energy prices decline, and resources become more available, local governments will need to enter the US renewable energy market to have access to growing opportunities. Cities will need to create clean energy plans that combine several types of projects and partner with each other to purchase energy together. Governments can use their strategies to expand renewable energy for their entire communities by looking into initiatives with an emphasis on minority and low-income neighborhoods. By working both strategically and in partnership with the private sector and institutions, cities have the potential to change electricity usage in the US and play an important part in growing the renewable energy market for our future. 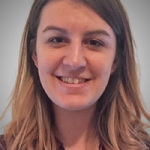 Lindsay Durkalec is a Senior Business Development and Marketing Associate at ESI, where she supports the business development team. In addition to assisting with proposals, Ms. Durkalec is responsible for enhancing ESI’s brand and work through traditional and social media, content development for the web, and managing the ESI blog, Present Value.