Running the Numbers, Tracking the Impact

As I sat down to lunch on April 17th at Joe’s American Bar and Grille, I stared around the crowded restaurant. The dining room was filled with excited athletes, many of whom were wearing their official blue and yellow Boston Marathon jackets. Digging into my $23 chicken, I considered the economic impact these running enthusiasts were having on Boston’s economy.  As one of the world’s oldest consecutively run road races, the Boston Marathon draws the majority of its 30,741 participants from outside of Boston.  Not only do these participants eat at Joe’s American Bar and Grille, but they also shop at local businesses and stay in hotels for the weekend.  According to the Greater Boston Convention & Visitors Bureau, the 2015 Boston Marathon brought an estimated $181.9 million in spending to the Greater Boston region. These spending estimates include participant and spectator spending, as well as additional spending by the Boston Athletic Association and their sponsors.[1]

Many similar studies have analyzed the effects of major marathons, triathlons, youth athletic tournaments, and other participant sporting events on local economies. The results are quite clear: as additional non-local athletes and their families travel to a new area to partake in a sporting event, they engage in the city’s local economy and quite literally “go to town”. It is also worth noting that the participants of sporting events have the economic means to not only participate in the events, but also are able to spend money on extra luxuries.  In many cases, they spend an entire weekend eating at restaurants, staying in hotels, and purchasing souvenirs at local businesses. By stimulating the economy, the athletes and spectators support jobs and generate new tax revenues.

Visitor bureaus and tourism offices in both small towns and larger cities have realized the benefit of “Sport Tourism.” Sport Tourism encompasses travel that is related to both participant sports and spectator sports. Amateur and professional sporting events can often serve as an effective tool for encouraging new capital investment, stimulating the economy, and promoting community engagement. As such, visitor bureaus have taken significant measures to market their city as an ideal location for new sporting events.

Quickly after contributing to Boston’s economy myself, I became interested in what specific effects these large races have on their host cities, their economies, and more specifically, their hotel markets.

How much of an impact do large scale sporting events have on the price of nearby hotel rooms?

Due to the increasing popularity of triathlons across the country and world, I chose to focus the hotel cost analysis on IRONMAN triathlon events. An IRONMAN triathlon consists of a 2.4 mile swim, a 112 mile bike ride and a 26.2 mile run. When the athletes complete that 10 to 17 hour race, they most definitely need somewhere to sleep.  During the weekend of an IRONMAN event, the majority of non-local athletes and their families stay in hotels. In fact, survey results from the 2014 IRONMAN in Chattanooga found that, of the 2,612 participants, approximately 82 percent were from out-of-state and stayed in Chattanooga for 3.7 nights on average.[2]  Similarly, 85 percent of all survey respondents who competed in the 2014 IRONMAN in Cambridge, Maryland stayed in hotels or B&Bs for the race and generally stayed for over three days.[3]

Does this increased demand for hotel rooms affect the cost of nearby hotel rooms?

During 2016, 40 World Triathlon Corporation IRONMAN[4] events will occur across the globe, 13 of which will be hosted in the Unites States. The following analysis includes seven of those American races that will take place between July and November.  First, multiple hotels in each race location were chosen to provide a sample of hotel costs in the area.  Hotels ranged in rating, size, and distance from race location in order to capture the expected differences between various hotels. Hotel costs, where available[5], were then collected for each month from May to December.  A simple analysis of average hotel costs per month in each of the seven race locations shows the changes over time. In the figure below, the large dot on each line indicates the month of the actual race. 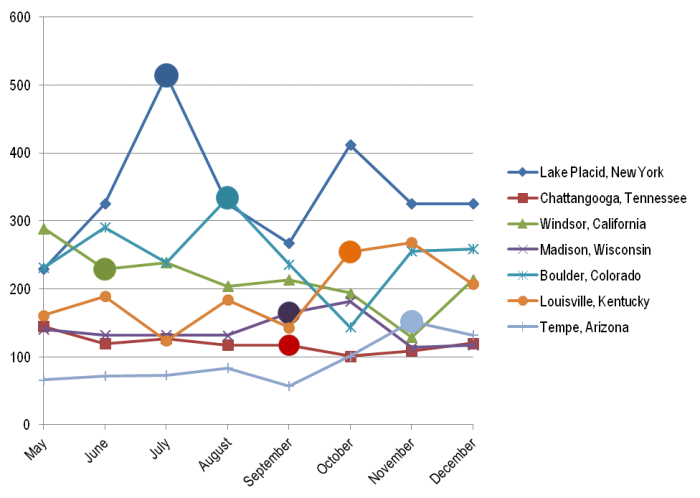 In order to see the actual effect the IRONMAN event has on hotel costs, I had to isolate the event from all the other possible variables. This can be done by using a hedonic regression, which controls for other potential explanatory variables such as hotel rating, hotel distance, and season of visit. Holding all else equal, the results suggested that during the weekend of each of the seven IRONMAN events, hotel costs per night were approximately 42% higher than hotel costs through the year.[6] These spikes in host costs are seen in the graph above.

The results of the analysis are not surprising. As large groups of tourists travel to a small town and are all in need of a hotel room, demand increases. All of us (including hotel operators) know how supply and demand work. As demand for hotel rooms increases and supply falls as race day approaches, travelers will be willing to pay a higher cost for an available hotel room.

Sport tourism has proven to be a great method of bringing additional economic activity to a town of any size. The impacts go even further than those of hotel rates, bringing increased business to the local shops, bars, restaurants, and various tourist attractions. As these sport events continue to gain popularity, the effects will only multiply, providing much needed healthy entertainment and economic stimulation.

[4] There are hundreds of additional Ironman-distance triathlons, but the analysis includes only those races which are IRONMAN branded, as they generally attract the most participants.

[5] There are several limitations to note. In some cases, no hotel rooms were available for the weekend of the event. In other cases, hotel costs were not yet determined for dates so far in advance.

[6] The regression analysis yielded an R-squared value of .71 and the relevant variable had a p-value of less than .001.