This week in Present Value, we highlight a case study from Building a Hyperconnected City recently released by our thought leadership arm, ESI ThoughtLab. We take a look at the tools and processes Santiago, Chile has put in place to become a more hyperconnected city.

The hyperconnected maturity of most emerging market cities lags those in better developed countries due to scarce financial resources, a poorer advanced technology base, and often a shortage of the necessary human capital. Yet some cities perform better than their peers. In Latin America—the most urbanized region of the world after North America—early adopters of technology solutions to urban problems include Chile’s Santiago. It has received multiple smart city awards, is the second leading Latin American hyperconnected city in our rankings, and the top Latin American urban area in smart city rankings produced by Cities in Motion of Spain’s IESE Business School.

An Emerging-Market City Stands Out 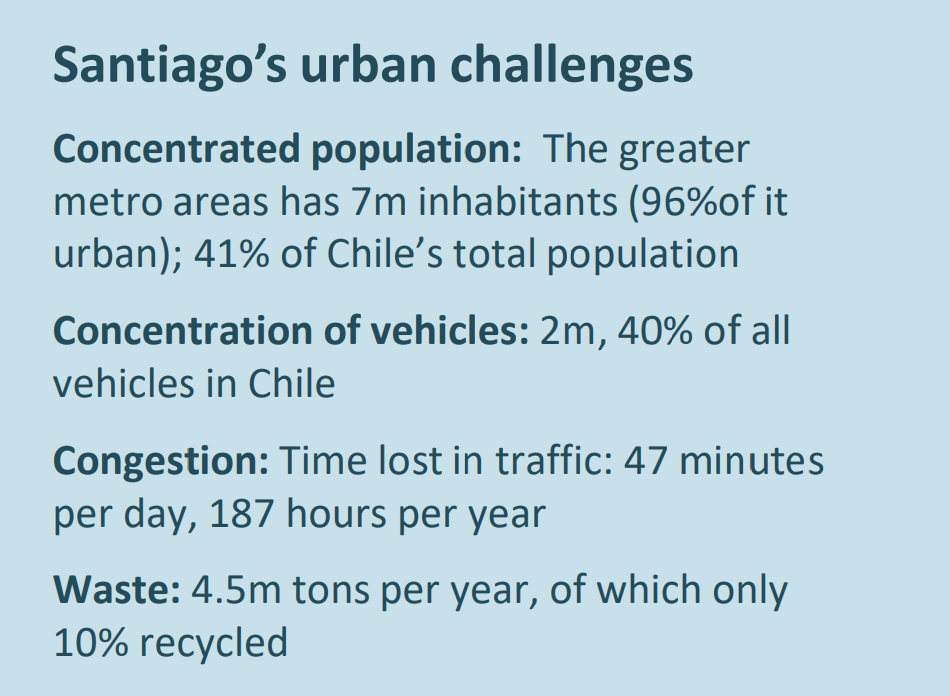 Through its Smart City Santiago (Santiago Ciudad Inteligente) program, launched in 2015, Chile’s national development corporation (Corfo) is bringing together public and private capabilities to use technology to promote economic development and create a more sustainable city.

By 2016, Santiago already had in the works solutions such as automated pricing for tolls based on traffic levels; smart parking systems; a bike-sharing program; apps for delivering public services; and others. Today, Santiago is ahead of many peers in areas such as disease monitoring and telemedicine.

According to Gloria Moya, Deputy Regional Director with Corfo, emerging-market cities would do well to follow some basic practices on their path to becoming hyperconnected.

Focus on only a few areas initially as your program gets underway. Priorities should be based on a city’s available resources and identification of its most critical needs. Santiago targeted mobility, security, and the environment. Within these areas, it has focused on a few key initiatives: urban cargo transport and electric mobility; crime prevention; and waste management and recycling.

Have a clear roadmap. “It’s important to map out and visualize the smart city program, and have short, medium, and long-term goals that can generate initiatives and results with differing impacts and timelines,” says Moya.

Figure out how to harness your data. A big challenge for emerging-market cities is utilizing and analyzing the large volume of data they generate to support sound decision-making. For cities to be hyperconnected, technology and data must work synergistically to drive performance. A strong data management system and analytics capabilities are needed. Data policies should also be flexible to keep up with changing technologies.

Don’t do it alone. Hyperconnected cities need to collaborate with a wellfunctioning ecosystem that includes the private, educational, and non-profit sectors. “Working with industry, academia, and the citizens can generate not only joint initiatives but also unexpected synergies,” says Moya. 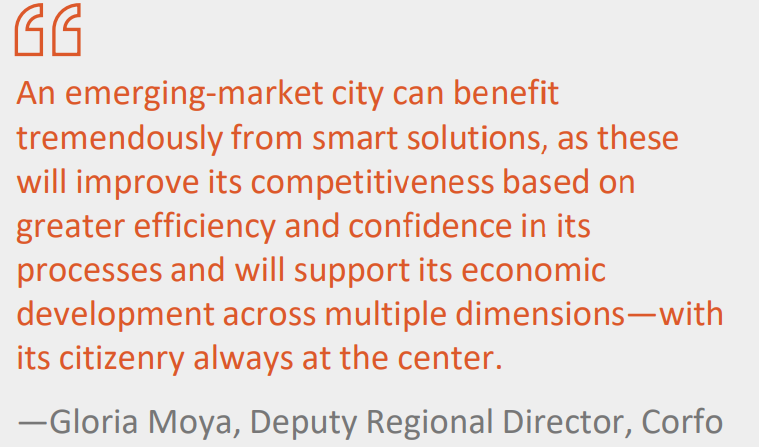 Ensure you have robust leadership. “It’s critical to have leaders who are committed and capable enough to bring together multiple parties in the ecosystem,” says Moya. In Chile the commitment is strong: Smart City Santiago is overseen by Corfo, a national agency reporting to the Economy Ministry.

Strengthen human capital. This goes beyond supporting the development of technical skills and extends to creating a knowledge economy and the conditions and resources that facilitate innovation and entrepreneurship.

As Chile’s capital and largest urban center, Santiago’s efforts go hand in hand with, and are supported by, the national government’s own digital transformation strategy. In 2018, Chile launched its 2018-22 transformation plan, through which it seeks a radical realignment of government processes, production, and delivery of services. “By 2022 we aim to position Chile as one of the 20 most advanced countries in digital government in the world,” says the strategy document. The plan has several core elements:

ClaveUnica (Unique Key). This is a digital identity and authentication platform that serves as an on-ramp for citizens to access all government services and information online. At present, there are more than 5m users (out of a population of 19 million). By 2020, all government procedures will be accessible by using this identity and login.

Estado CeroFilas (Zero Queues). Government institutions handle around 3,200 procedures, of which only 40% are fully online. The remainder are done in person—equating to 14 million transactions annually, 31 million hours spent, and $168 million in opportunity cost. By 2022, the government aims to have 80% of transactions online.

Estado CeroPapel (Zero Paper). Public employees spend 70% of their time handling documents, equating to an estimated $1bn in cost. By 2020, all intragovernment communications will be online, and by 2022 50% of government records will be digitized. Estado Basado en Datos (Data-Based State). The aim is to optimize use of data, improve its quality, and make it more transparent for the public, partly by adopting AI and other emerging technologies.

Cybersecurity. In 2018 the government launched an effort to define a national cybersecurity policy, including new legislation, inclusion of cybercrimes in the penal code, strengthening of cyber personnel within the Interior Ministry and other agencies.