The Economics of Reinvention

Losing a major employer can be devastating for any city and a more significant challenge when it impacts multiple communities. Such is the case with Fort Monmouth, the former military fort that spans across the towns of Oceanport, Tinton Falls and Eatontown, NJ.  All of which have a population of less than 20,000 and only a few large employers.

Fort Monmouth was a key economic driver in Monmouth County for more than 90 years. The 1,200 acre installation was a major economic engine within the region, providing nearly 8,000 jobs and five million square feet of building area in its peak activation, 70% of which is now targeted for demolition. The Fort’s history can be traced back to the establishment of the Signal Corps training facility in Little Silver, NJ in 1917. It served as the home of the Signal Corps Laboratories, the Signal Corps Center, and the Communications-Electronics Command (CECOM), which managed signal research, development and logistics support. Many firsts in telecom and satellite communications are rooted here. In 1928, the first radio-equipped meteorological balloon soared into the upper reaches of the atmosphere, a forerunner of the weather sounding technique universally used today. The first U.S. aircraft detection radar was also developed here in 1938. In 1946, space communication was proved feasible when the Diana Radar was used to bounce electronic signals off the moon.

Fort Monmouth is the largest redevelopment project I have worked on as a city planner and is, in fact, the largest redevelopment site in the state of New Jersey. Fort Monmouth Economic Revitalization Authority, the local redevelopment authority authorized to manage the Fort’s disposition under Base Realignment & Closure (BRAC), has delicately orchestrated one of the largest redevelopment plans ever undertaken to-date, while convening stakeholders to realize the goals and expectations of three diverse and distinct communities. Each municipality within the Fort’s boundaries has its own vision for Fort Monmouth’s redevelopment; however, the replacement of tech jobs that once dominated the area, and the attraction of younger residents and tech workers remains a part of a larger mission to create a vibrant and sustainable community. This is resulting in the area being branded as the “Silicon Shore.” 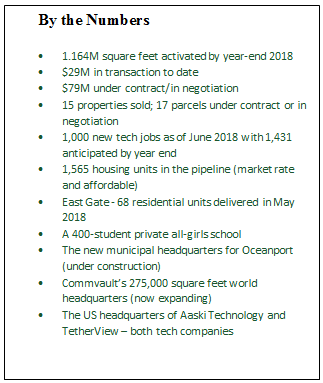 The redevelopment plan integrates a deliberately extensive mix of land uses to help accelerate redevelopment and provide the creation of a diverse range of jobs and housing types to meet the needs of a demographically diverse population in a competitive and changing marketplace. The implementation of the plan has required a strategic balance of goals and objectives, interest and expectations of investors, and the coordination of potential sites to assure an impartial sharing of new investment, new tax revenue and reinvestment.

While the fort has not yet returned to its full economic potential, significant progress has been made in a short amount of time. New development that has recently been completed includes 1.16 million square feet of commercial space and 116 residential units, along with a mix of civic, entertainment and institutional uses. 15 parcels have been sold and 17 parcels are currently under contract, in negotiation or in the development pipeline, representing $108 million in transactions. 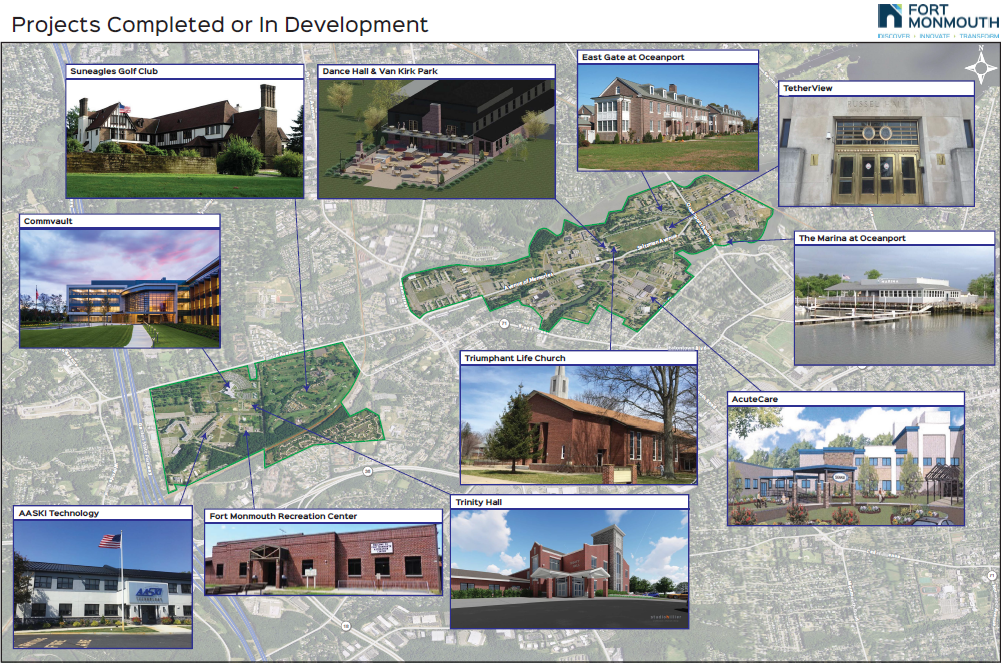 And there is more to come. Some of the best parcels have yet to enter the market, including the McAfee Center, a two-story building of nearly 90,000 square feet of office space, raised-floor dry lab space, an anechoic (electro-magnetic frequency restrictive) chamber, and high-bay warehouse space. Another site soon to hit the market is known as the 400 Area, formerly occupied by barracks, and slated for a transit-oriented mixed-use development. The site is a half-mile from the facility in OceanPort (a one-seat ride to Manhattan), close to the Fort’s new Marina, and ten-minute drive to the beach.

Like many communities, Ft. Monmouth has a historic district, encompassing 100 acres in the center. It is characterized by early 20th century residential and non-residential structures organized around the former parade grounds, and has mature shade trees lining the streets. This is where the first phase of new residential development will be completed in the former North & South Post Officer Housing quarters. Immediately adjacent to the historic district are a church, a school, a dance hall that will soon be renovated into a brewery and restaurant, a recreation center, a bowling center and more.

Have a passion for history, a great imagination, or the skills to repurpose obsolete property? Visit Fort Monmouth for more information. You won’t be disappointed by the endless opportunities.

Catherine Timko is the founding principal of The Riddle Company, a Washington, DC-based economic development marketing firm, as well as a senior advisor at Econsult Solutions. Retail attraction is one of her specialties. Catherine has completed retail marketing and attraction strategies for almost every major market on the East Coast including Miami, Atlanta, Washington, Baltimore, Philadelphia, Newark and Boston.