Universal Basic Income in the U.S.

Navneet Singh and Delsea Albanese were Drexel University Co-Ops with ESI from September 2018-April 2019. ESI was delighted to give them the opportunity to explore a topic of interest and work together to create a blog post on their chosen topic – Universal Basic Income. We thank Delsea and Nav for their hard work this semester and wish them the best in the future!

Universal Basic Income (UBI) is a topic more and more people are discussing these days. UBI is a proposal that every U.S. citizen above the age of 18 should receive an income every month (around $1,000), which they would be free to use however they deem necessary. We’ll look at a few reasons why UBI has the potential to create positive effects on our society and we’ll also look into some cases of cities that have decided to test out UBI.

With the automation of jobs increasing rapidly in the United States, many people believe that part of the solution to massive job loss would be to introduce a guaranteed income or a UBI. According to a McKinsey report, about half of all jobs around the globe that people are paid to do can be automated using technology we have available today. The report also states that by 2030, 15% of the global workforce could be displaced due to automation. So how is UBI a solution to job loss? UBI would not completely solve the job loss problem, but it would allow people to receive an income that would be enough for them to take care of necessary human needs. This way, even if people don’t have jobs and a way to bring in steady income, they could still survive and would not be completely left in the dark.

In terms of mental health, UBI is being looked towards as a possible solution to help better the mental state by reducing the stress of average working Americans. Within the last few decades, economic prosperity in first world countries has made it so that the top 1% continues to get wealthier, while the working-class work longer and more frequently, receiving less compensation for their efforts. A 2017 study by Mental Health America shows that the majority of American workers are unhappy with their job. Seventy-one percent reported that they are seeking a new job and almost two thirds reported that they feel like their job is having a significant impact on their mental health. The stress of not making enough money and not having financial stability is something more and more Americans are experiencing as time progresses. Bankrate’s Financial Security Index survey reports that just 39% of Americans could afford to pay an unexpected $1,000 bill. In the 2017 Mental Health America study, 45% of Americans reported that they felt like they were being overlooked at work and never/rarely got paid what they felt was their worth. With UBI, many Americans believe they would have some much-needed financial assistance which would lessen their mental burden.

There are several cases of cities that have tried out one form or another of UBI. An example of a trial of UBI was Dauphin, Canada’s Manitoba Annual Income Experiment (The Mincome Experiment), conducted between 1974 and 1978. This is one of the first examples of a universal basic income program applicable to an entire population and thus serves as a key reference when analyzing the results of UBI. To qualify for Mincome treatment, residents of Dauphin needed to fall within the income ceiling of $9,000 per family. The 586 families who qualified each received CAD $3,800 per year with a negative tax rate of 50% for three years. Through Mincome, Dauphin concluded several findings on Universal Basic Income; improved health outcomes, increased student enrollments, and the lowered stigma related to receiving welfare. Prior to the Mincome experiment, hospitalization rates were 8.5% higher in Dauphin relative to the other control groups in Manitoba (Canadian province). By 1978, the Dauphin hospitalization rates in comparison to control groups dropped significantly. In addition to improved health outcomes, 12th grade enrollment rates increased significantly. Further, due to the UBI program not distinguishing unqualified recipients, there was a lowering of the stigma attached to social welfare.

Though the Dauphin community saw positive results, the Mincome Experiment was defunded in 1978 after the program’s funding was viewed too costly by the Canadian Federal Government. It was deemed that there were two key reasons for this overshooting: the lack of focus in the project design and the excessive size of the Mincome research team.

UBI in Dauphin demonstrated substantial increases in health outcomes and increases in educational enrollment, as well as very minimal side effects to labor supply. The Dauphin trial also showed significant potential to better social factors in a society.  Overall, based on the data provided by the Manitoba Annual Income Experiment, there is great potential for the future implementation of UBI schemes.

Another city that started testing UBI in February of 2019 is Stockton, California. Stockton has decided to give $500 a month for the next 18 months to approximately 100 residents of Stockton. This dividend is unconditional, meaning that the recipients have no restrictions as to how they can spend their money. The recipients must be at least 18 years of age, live in the City of Stockton, and reside in a neighborhood where the median income is less than $46,033. There is also a control group in this study who will not receive an income but have agreed to share insight about their financial situation and overall lifestyle. This will help determine what affect UBI has on those receiving the additional income, and how their situation compares to those who do not receive it. The researchers hope to see how UBI affects financial security, civic engagement, and the health/well-being of Stockton residents.

Closer to home, Newark, New Jersey is also a city that see’s optimism in UBI. During his latest State of the City address, Mayor Ras Baraka stated that the city is looking to do a pilot run for UBI and would be deploying an “exploratory task force” to get a sense if UBI is right for Newark. Newark is a city where UBI could have a major impact, as a third of the city’s residents are considered to be living below the poverty line. Mayor Baraka understands that Newark families are struggling and made the following statement, “We believe in universal basic income, especially in a time where studies have shown that families that have a crisis of just $400 in a month may experience a setback that may be difficult, even impossible to recover from.”

Proposed Cost of UBI Compared to GDP and Gov Spending 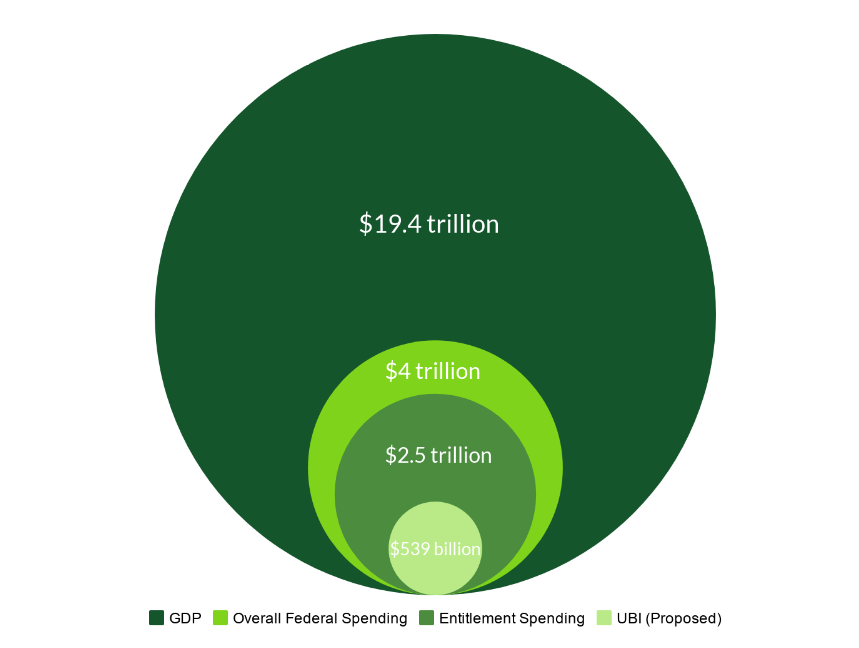 One big question looming around UBI is “What will the cost be?” The common figure that gets thrown out is usually around $3 trillion; however this is just the gross cost according to economist Karl Widerquist. Based on Widerquist’s model, if each American adult receives $12,000 and each child receives $6,000 (per year), the net cost would be somewhere in the ballpark of $539 billion. Getting further into detail about the net cost, Widerquist says “The net cost of this UBI scheme is less than 25% of the cost of current U.S. entitlement spending, less than 15% of overall federal spending, and about 2.95% of Gross Domestic Product (GDP).”

Today, people are advocating for UBI to be implemented across the United States because history has shown them the benefits that an “extra income” can provide to a community. Many advocates for UBI see hope in a guaranteed income, especially in the current market where job stability is quite volatile and people aren’t sure what to expect as we progress into the midst of a technological revolution. Trial runs show that UBI has proven effects on bettering communities in terms of overall health, lifestyle, and education, among other key aspects. More and more cities are seeing these results and are deciding that their residents should also test out UBI. It will be quite interesting to see in the coming years which cities explore further into implementing a Universal Basic Income and how the results will compare to what we’ve seen so far.

Delsea Albanese was a Drexel Co-Op with ESI from September 2018 – April 2019. Ms. Albanese is majoring in General Business at Drexel University and is set to graduate in June 2023.