In September 2015, the Washington Post wrote the obituary for “America’s fading car culture” entitled “Cruising toward Oblivion,” [i] echoing a June 2013 New York Times piece entitled “The End of Car Culture” which declared that, “America’s love affair with its vehicles seems to be cooling.” So imagine my surprise when I recently scrolled over to the latest federal statistics on national vehicle miles traveled (VMT) and discovered: 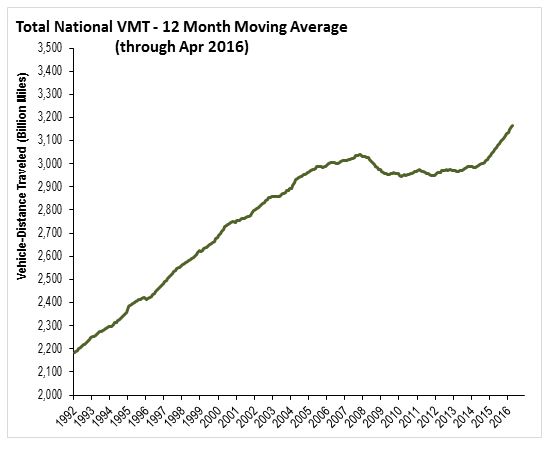 Wow. Now granted, gas prices are at historic lows, and monthly job gains continue unabated. But you don’t have to squint real hard to see total VMT returning very rapidly to the historic growth trend, and to imagine it climbing inextricably onwards and upwards for decades to follow. Did everybody get this one wrong? Let’s take a closer look.

First things first, do we have the right metric? There are a lot more potential drivers today than a decade ago, so we should probably population-adjust (via Doug Short of Advisor Perspectives): 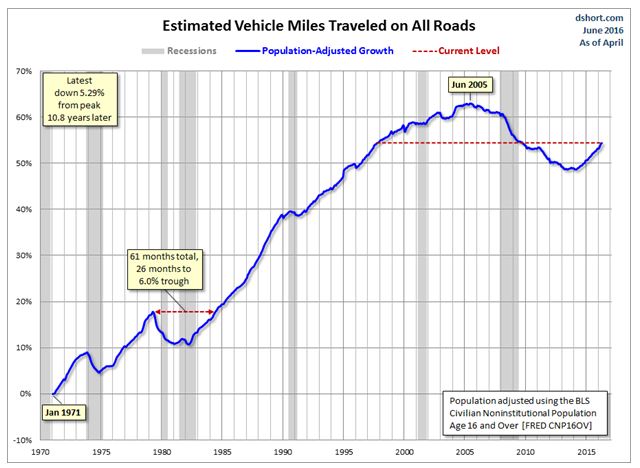 Ok, that makes more sense – per capital VMT is still well below pre-recession norms. But the uptick starting near the end of 2014 and gathering speed is still apparent. And unfortunately, that means it takes place since the latest release of Census Bureau data most commonly understood to represent the best picture of transportation (and in particular, commuter) patterns. So let’s rewind the tape a bit further – what caused the drop in VMT in the first place?

Two principal theories have emerged, which can perhaps best be summarized as “It’s the Economy, Stupid” and “Kids These Days.” Under the former, vehicle miles were simply another casualty of the great recession, and would ultimately resume unchecked once the economy escaped the doldrums, while under the latter “the millennials” were on the precipice of ushering in a new transportation frontier, changing car usage patterns for decades to come. The wildly different pictures of the future yielded by these competing frameworks have significant implications for planners and policymakers in the years to come.[ii]

The ultimate resolution to this question is of course years (or decades) away, but the question for today is, what can Census Bureau data tell us about the declines in VMT through 2014, and in particular differences in behavior by generation, that might yield some insight into the future? One potentially promising approach is to compare age cohort data longitudinally, meaning tracking the behavior of the same groups as they age. The intuition is that this exercise might shed light on two (related) questions:

With the help of data wizard Rinoa Guo, ESI undertook custom analysis of Census data[iii] to determine changes in car commuting percentages among residents of Philadelphia and the 5-County region over the past decade. For each birth year cohort, car commute proportions from Census 2000 were compared to current data from the 2010-2014 American Community Survey.[iv] Declines were observed across every cohort, with overall commuting percentages falling from 62% to 59% in Philadelphia and 80% to 77% in the region, consistent with the national declines in VMT: 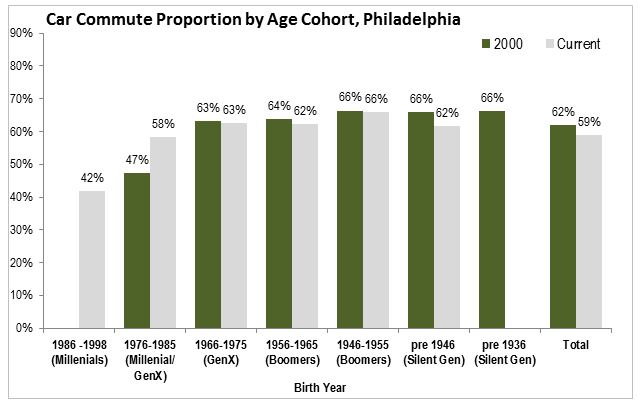 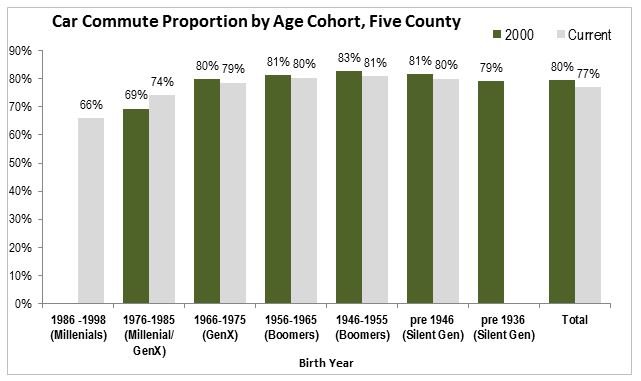 The downward shifts in car usage for commuters born before 1976 (all but the first two groups) are subtle, but they are consistent – and they apply to the bulk of the commuter population. In fact, the changes in these groups alone (i.e., holding the younger groups constant) explain about 30% of the change in the overall commute levels for both geographies. Are these changes likely to be enduring as economic conditions improve? Perhaps not – declines of a one or two percentage points seem to fit the classic economic model of incremental responses on the margins to changes in price incentives, rather than a cultural shift in lifestyle preferences. It would stand to reason that these same consumers might see the current gas price environment as a reason to get back on the road, fueling the rebound in VMTs.

But what of those bars at the far left, the Millennials who have recently become America’s largest generation? There is no question that current car commute proportions among these cohorts are far below their elders – the question is whether this differential will endure as millennials join their elders in the responsibilities of adulthood (and parenthood).

As of the year 2000, when they were 25 and unders, this cohort had markedly different car commute patterns from their elders. Meanwhile, the 25-34 year group of 2000 (GenX), had nearly identical car commute percentages to the generation above them (the younger Boomers born 1956-1965). In other words, as of 2000, 25 was the age where you grew up and started driving to work, and it may have been logical to expect the next generation to do the same rather than maintaining lower car usage rates as they aged: 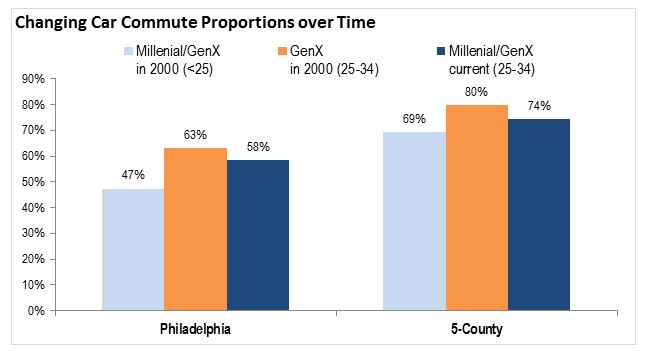 Instead, it looks like the Millennial/GenX group pretty much split the difference, increasing their car usage significantly as they reached the 25-34 age range, but still falling well short of the car usage levels of the older GenXers when they were the same age. Certainly, economic factors cannot be ruled out as an explanation for this differential, which could be categorized as another data point in the story of the generation still stuck in their parents’ basement. However, the gap between car commuting in the current group at ages 25-34 and GenXs when they were the same age is far larger than the declines that any of the 1975 and older cohorts demonstrated over the past decade. It therefore suggests the possibility that the commute patterns for the younger generation are in part preference driven. The notion of shifting preference is supported by a wide variety of interconnected causal mechanisms among younger generations (preference for urban living, enhanced concern for the environment, adoption of connective technologies, etc.) that could plausibly contribute to a reduced reliance on private cars as the central means of transportation.

If changing preferences are indeed responsible for these behavioral shifts in Millennial cohorts, even at a relatively small scale, the effects could be profound. The potential implications can be glimpsed simply by looking one bar to the left, where the younger Millennials already dwarf the next cohort in their move away from the car, and the denizens to follow. If these preferences are indeed enduring, the transformation in America’s car culture, and more importantly its transportation habits and needs, may indeed be coming yet. It just may take a bit longer than originally thought.

[i] In the style section, where all the best economic analysis takes place

[iv] The age cohort comparison is necessarily a bit of an inexact science when dealing with ACS data that is drawn from a five-year sample. ACS 2010-2014 data is perhaps best thought of as being “as of” 2012, the midpoint of the sample period. Since age ranges are generally ten years, and gap between observations slightly exceeds ten years, the “current” cohorts are not an exact longitudinal match for the Census 2000 cohorts. Nonetheless, the comparison should be indicative of broad trends, and most birth years in each cohort match up in each observation.

[v] There is considerable debate over the exact definition of a Millennial, but the Pew Research Center sets the cut-off at 1980, which seems reasonably in line with the consensus. Whatever the exact date (as a 1982 baby, I plead the fifth), the 1976 – 1985 cohort appears to contain the meeting point between Millennials and GenX (which is sometimes assigned its own label, as GenY).