The Philadelphia Housing Index remained flat in June, though prices remain at an all-time high. The apparent slowdown of last month persisted, as season- and quality-adjusted sales prices in June held steady. 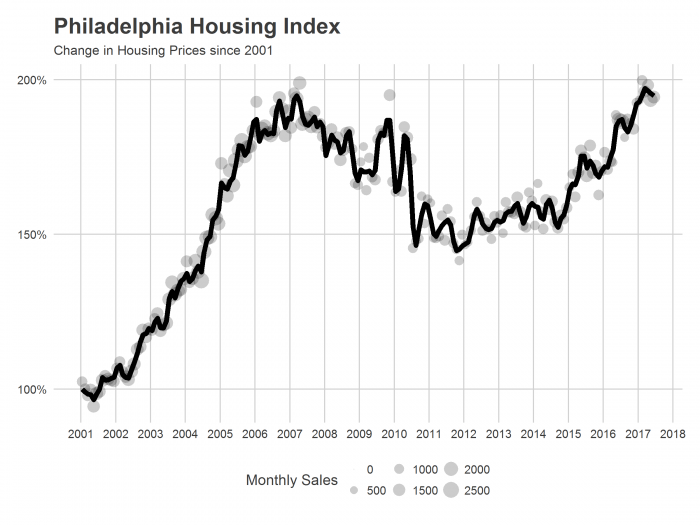 Just how much work is that seasonal adjustment doing, though? Here are the unadjusted median sales prices of each month. Notice that we actually saw a spike in the median sales prices. If you just focus on the price tag, this past June was the highest on record. (Notice that by this same metric, May was entirely flat year over year). 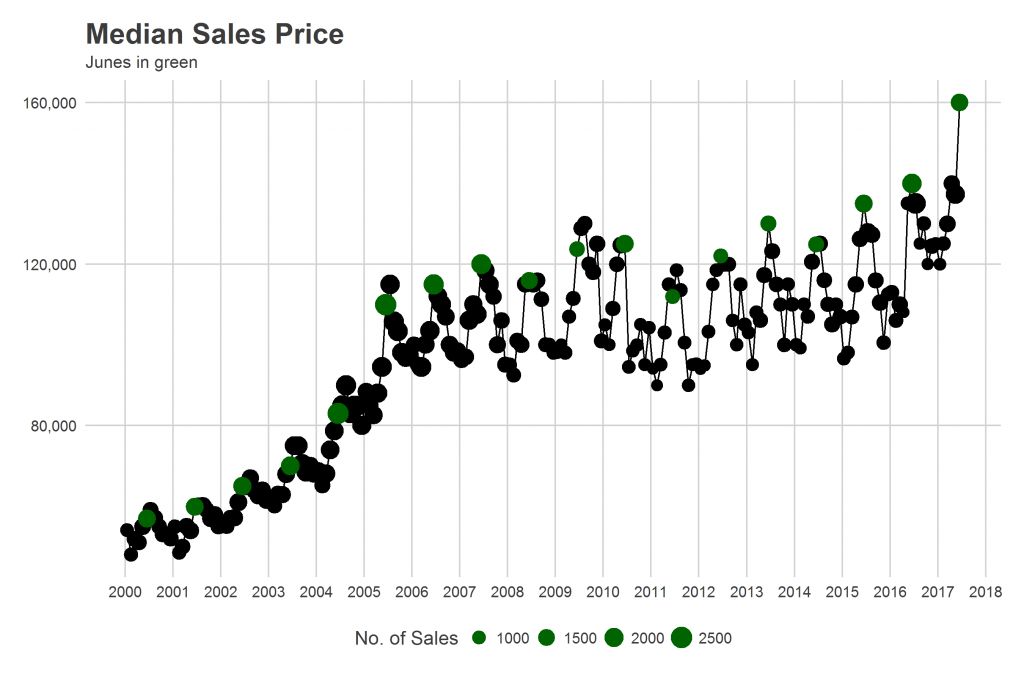 However, the June houses were also a lot nicer. Our model adjusts for the observed traits of houses, things like number of stories, size of the lot, age of the property.  We want to compare apples to apples, so we aren’t expecting mansions to be priced the same as row houses. We calculate the value of each observable trait, and subtract that from each house’s sales price. What is left is the added value of the neighborhood.

The figure below shows the estimated value of only the observable features of the houses sold, which we subtract out of the price in order to calculate the index. Notice two things. First, the houses being sold are much nicer after the great recession than leading up to. This is a function of the fact that (a) almost all houses were being sold in the pre-2008 bubble, while sales since have more been relegated to the cream of the crop, and (b) the boom in new construction in some Philadelphia neighborhoods means that the houses being sold are on average a lot newer. Second, notice that June houses are often among the nicer houses sold. This is because of the seasonal timing of the housing market in Philadelphia: both sellers and buyers time their activity for the summer, so the best houses get sold then, and the houses that are left over are more likely to be less appealing. 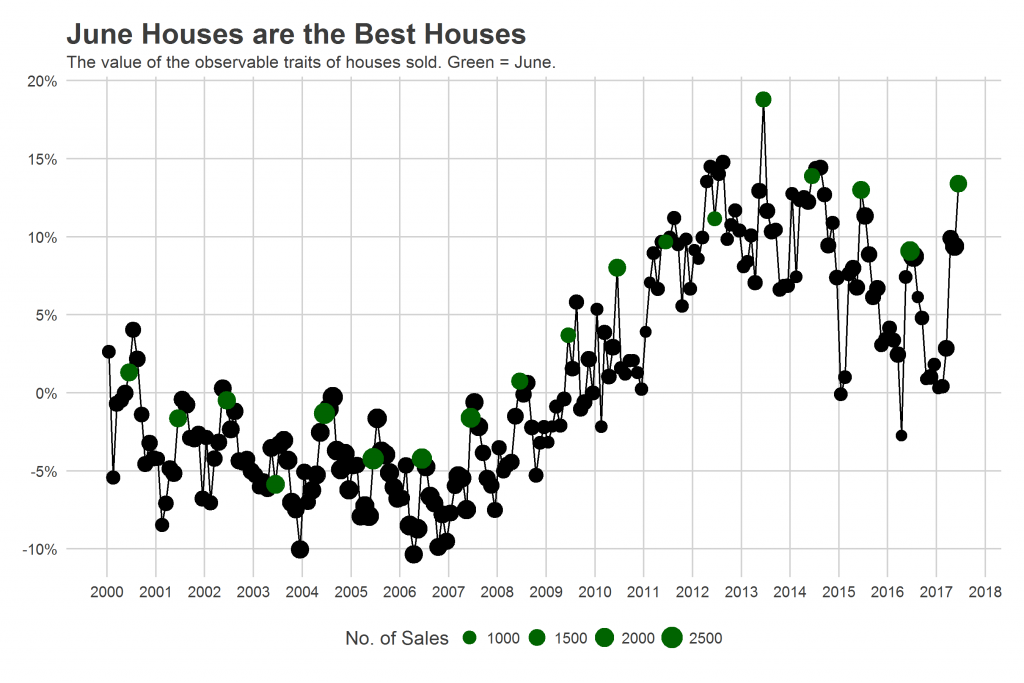 We do not observe all features of houses. Even two houses that appear the same on paper—with the same age, same size, and same build—may be quite different in person. That plays out in our index, too. Even after subtracting out the value of the observable features, above, June sales are still among the highest of the year, selling at a 7.6% premium compared to houses that appear the same on paper. This is likely due to their traits that are not in our dataset, and only appear in person. For the index, we subtract this seasonality from the prices as well. 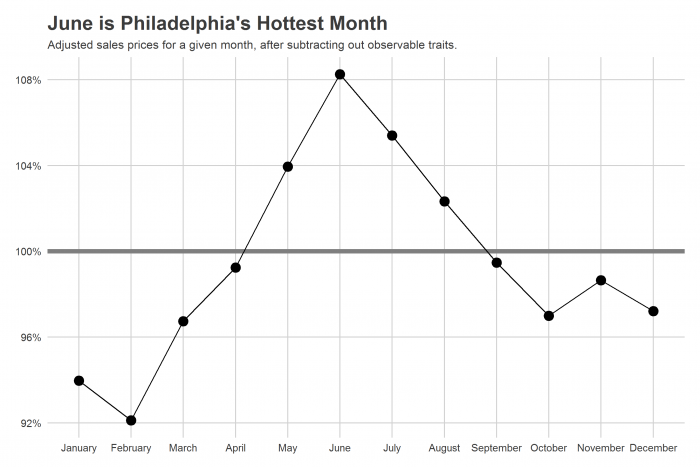 All of these facts, taken together, mean that even though the median sales price for June 2017 was up from May, it was only up by the expected amount, given historic June trends, and it appears that the Philadelphia housing market overall remains flat, albeit at historic highs.

We’ve spent some time in these pages looking at a few of Philadelphia’s fastest-appreciating neighborhoods. Let’s take a look at Fishtown, now a grandparent of the booming neighborhoods, and Point Breeze, home of the newest booming prices. Both have shown sharp increases since 2011, and now are among Philadelphia’s most expensive neighborhoods. However, the last year has treated them differently. Fishtown has been essentially flat for the past 12 months, while Point Breeze has continued its skyward trajectory (though it also had a worse-than-expected June). This may be an indication that Fishtown has completed the transition to high-priced neighborhood, and will begin to look more like Center City, with stably-expensive houses. Comparably, Point Breeze will continue to see its prices rise as gentrification proceeds, and the housing stock gets rehabilitated and sold. 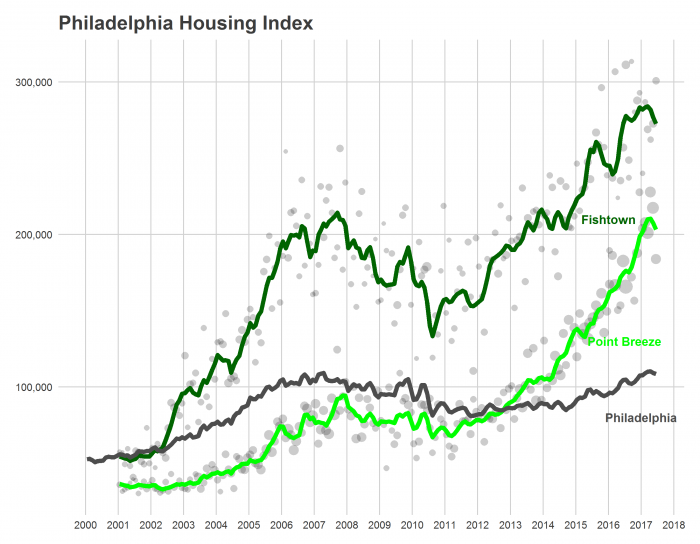 Jonathan Tannen, Ph.D., was a Director at Econsult Solutions, Inc. (ESI). Jonathan received his Ph.D. in Public Policy in Urban and Population Policy from the Woodrow Wilson School at Princeton University. His research interests include GIS, spatial statistics.