As we near the end of the fourth quarter of the year, the inevitable question arises—“How are we doing compared to last year?” Despite a slowdown in the overall volume of single family home transactions, Philadelphia is still on track to outpace the last decade’s annual sales volumes. As of September, home sales lagged slightly compared to the same time the previous year (because deed transfers can take up to 3 months to be recorded, we have not shown a preliminary estimate of sales volume in the city, as it would not be complete). While some watching the market estimate that a slowdown is underway, partly attributable to rising mortgage rates, we remain cautiously optimistic overall about the Philadelphia real estate market as other indicators—the PHI’s steady growth and an ongoing slate of single- and multi-family residential projects under construction. 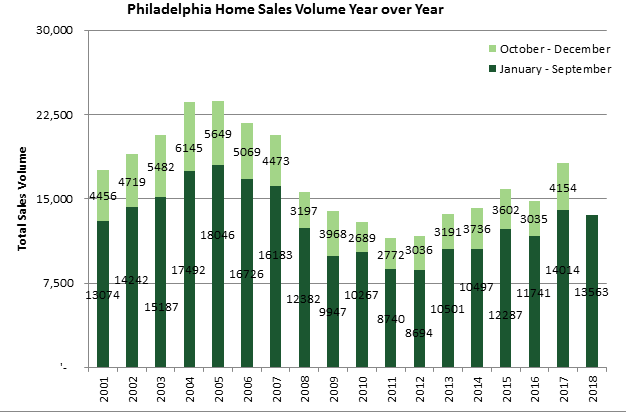 The current Index is $120,380, slightly lower than the 20-year peak that occurred in June 2018.  Recall that the PHI measures changes in sale price of housing units, adjusting for housing traits in order to compare like-to-like.

In terms of major housing-related projects underway, there are still some major residential projects underway, showing optimism among developers in Center City-adjacent neighborhoods who still see the chance for a return on their investment.

Kensington’s  current neighborhood-level PHI is $242,193, well above the City’s index. In this neighborhood, there are three sizeable new projects to mention: 2601 Emerald Street is a forty-unit development that is currently under construction, 2110 E Norris Street is a 95-unit apartment building that recently went through Civic Design Review, and 2000-2034 N 2nd St (Gotham Silk Hosiery Factory) will include 84 apartments and 12 townhomes. While the multifamily properties  would not factor into a future PHI calculation, the volume of residential activity demonstrates the continued anticipated demand for the neighborhood.

Neighborhood Redevelopment in the Coming Year
It’s worth noting that each of these neighborhoods described all have significant areas of their land within the recently-designated federal Opportunity Zones (OZs); and in all but the Washington Avenue examples mentioned, all of the developments fall within an OZ (in that case, the projects are directly across the street from an OZ census tract). This designation allows investors to benefit from capital gains deferral and reduction if invested in a qualified zone for five or more years.** While we do not know if the developers of these projects will use the OZ benefit available, the potential for these neighborhoods to see substantial future investment is a promising sign for these growing neighborhoods. With the right plans and investors in place, this redevelopment tool could bolster the ongoing revitalization that these and other Philadelphia neighborhoods have started seeing over the last decade.

** There are 65 of these zones in Philadelphia alone. The rules and regulations related to Opportunity Zones are a more intricate than described here. For the purposes of this blog, we have simplified the description. For more information on ESI’s OZ practice, please click here.