The opening session of Drexel School of Economics and Econsult Solutions’ first “City and the Environment: Topics in Urban Economic Policy” joint conference on Drexel’s campus on May 21 was highlighted by a panel discussion on how climate change can affect the housing market.

The panel, which was moderated by Econsult Solutions president and principal Stephen Mullin, included Richardson Dilworth, director and associate professor at Drexel’s Center for Public Policy, Douglas Noonan, associate professor and director of research at Indiana University’s Public Policy Institute, and Sarah Wu, deputy director for planning at the Philadelphia Mayor’s Office of Sustainability, discussing their respective areas of expertise and experiences. 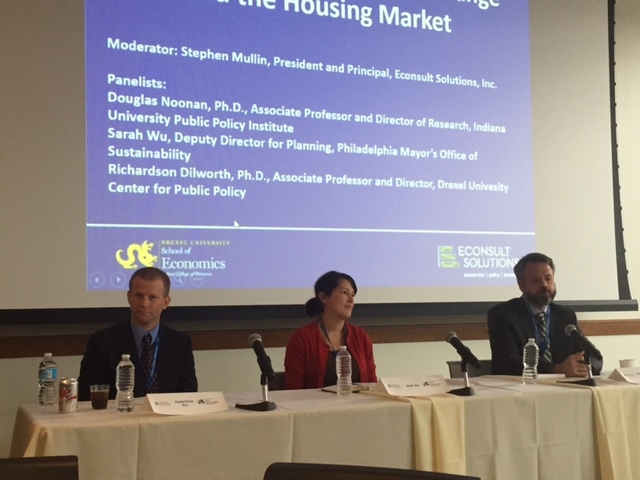 Following a panel introduction by Mullin, Dilworth began the discussion by talking about “growth machine models” – the thought that cities accumulate money for those in power by encouraging development at taxpayers’ expense and how that process has and will continue to hurt cities in the future as the climate changes.

Dilworth continued by giving examples of how some coastal cities are starting to invest and prepare for changes that can come with climate change. He cited Miami’s example of making new investments, increasing taxes and using money from those increased taxes to help protect against possible sea level rise. He also noted how Norfolk, Va. could potentially need $1 billion in investments for a similar plan.

Noonan spoke next and began by talking about how the nation’s population is migrating to Sun Belt cities and states. He said the current trend sees Americans willing to pay the cost of hotter summers to earn the benefits of warmer winters. He added that, at current rates, estimates see an 8 percent population shift by 2100.

The Indiana University professor ended his speaking time with a discussion on LEED-certified buildings. LEED certification is grading system set up by the U.S. Green Building Council to judge just how sustainable buildings are and how effectively they reduce emissions. Noonan said there are currently 30 states and 474 municipalities with green building policies.

Wu ended the panel’s speaking portion by describing how she and others in her office focus on five things as they try as best they can plan for future sustainability – energy, environment, equity, economy and engagement.

She also shared data from studies her office conducted. The data showed the Philadelphia is predicted to get incrementally warmer by a few degrees by the end of the century. The data also showed that that incremental increase in warmth will bring an increase in wet weather, especially during future winters, she said.

The discussion was capped off with a lively question-and-answer session that featured numerous questions from an audience that featured professionals and academics from different fields and Drexel students.

For more on the conference’s keynote address by UCLA Institute of the Environment professor Matthew Kahn, click here.

For more on the conference’s second panel, which featured a discussion on sustainability and urban transportation, click here.

Expert Views: Smart Cities Should Be Sustainable Too

A Preview to our Study: Smart City Solutions for a Riskier World
Share This