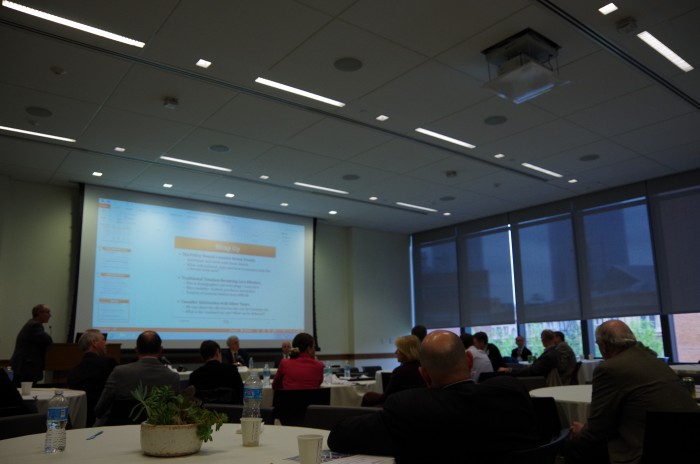 Dr. Kenyon kicked off the conversation with a discussion on the common pitfalls of tax incentives, an interesting counter argument to our keynote speaker, Dr. James Hines. She used the GE deal as a recent example. While many were excited to have GE in Boston, since it would bring jobs and support economic development, others were angered that the tax incentives for GE would mean cuts in other government funded areas, such as public schools and transit.

While tax incentives can be effective, they aren’t always the right solution for a city. She pointed out three holes in the logic behind providing tax incentives to businesses:

Dr. Kenyon’s point is that cities must be strategic and purposeful when it comes to incentivizing businesses. If a company has not settled on a city and needs the extra push, then the tax incentive can be effective, but the move must be strategic. Similarly, it is not beneficial for different cities and town in a metro area to engage in bidding wars, which only shift jobs across the metro area instead of creating new ones.

To finish, she provided possible alternatives to tax incentives: (1) lower overall taxes (2) cooperate rather than compete, and (3) Back to basics – be business friendly without emphasizing tax incentives. There are ways for a city to encourage economic activity and entice business without offering tax incentives.

The next panelist, Dr. Paul Levy, is well known throughout Philadelphia for his work in revitalizing Center City District. In his presentation, he outlined the transition Philadelphia has made and the work being done to encourage economic development.

After a brief history of the evolution of industry in Philadelphia, he explored what the city looks like today and future developments for the city. There has been a renewal of Philadelphia, concentrated in Center City and University City Districts. Philadelphia’s challenge is now to encourage growth and development in other parts of the city. There’s also an excessive dependence on wage and business taxes. While the city has seen growth, competition amongst other major cities is fierce, for they have surpassed Philadelphia in economic growth.

The central problem is that rents are undervalued in Philadelphia. By increasing rents in Center City, the tax base can be increased, which would mean more money for the schools, and the city can shift from being dependent on the wage tax and slowly reduce the wage tax over the next decade and cut net income part of the Business Income and Receipts Tax.

Philadelphia has become a dynamic city, with a thriving downtown area for all to enjoy, but this growth must continue. The potential is there, with an educated work force, a strong entrepreneurial culture, and industry growth and diversification. With Dr. Levy’s proposed tax reform, 80,000 jobs could be added over the next decade, tax revenues would increase, and it would generate $362 million more for the School District, as revealed in an economic impact study done by ESI.

The conference closed with a presentation by Dr. Knittel, who explored how different factors and trends affect tax policy in Pennsylvania. Here are some of the key trends he identified:

So what do these trends mean for tax policy? In general, tax policy should consider broad trends to better map out what national, state, and local economies will look like in the future. With a more mobile labor force, changing demographics, and improvements in technology, traditional forms of taxation have become less effective. Policy makers should also be concerned with how taxes interact with each other to better understand tax deductibility across the local and state levels.

Check out the keynote presentation and Panel I: Tax Administration.