The View From Ridge: Neighborhood Change Along Philadelphia’s Ridge Avenue

Once a vibrant commercial corridor, the built environment of Ridge Avenue in North Philadelphia has suffered from decades of economic decline and neglect. Recently, the neighborhood just west of Broad Street known as Francisville is on the rise, with several vacant and blighted properties being converted into a mix of affordable housing and upscale market-rate housing. As of yet, there appears to be very few new commercial developments to add to the formerly bustling history of Ridge Avenue. This level of investment has yet to make its way further along Ridge Avenue north of Girard College. 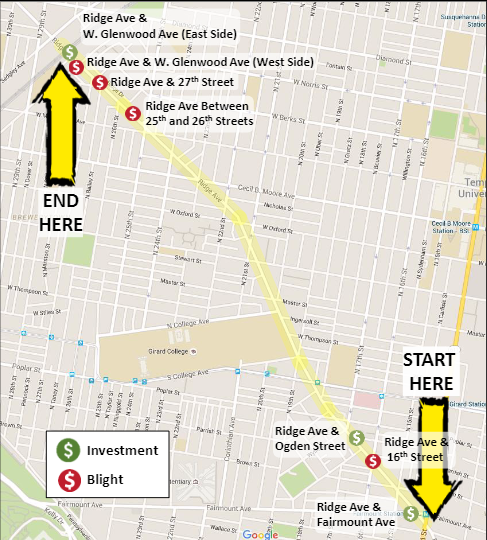 The observable change in this section of Ridge Ave caught my eye when performing a market study as part of a Low Income Housing Tax Credit (LIHTC) application for one of ESI’s affordable housing developer clients. As part of the application we described the state of the neighborhood, by travelling to the proposed site and taking photographs of the existing conditions.

Seeing the blight of these neighborhoods and pockets of recently completed development got me thinking about other locations in North Philadelphia that encompass palpable visual neighborhood change, both positive and negative. With Alex Alsup’s project GooBing Detroit as inspiration, I “took to the street” (views) of this section of North Philadelphia to find visual examples of neighborhood transformations. Using Google’s Street View and Bing’s StreetSide, I captured the current state of these streetscapes, and compared to historic images from as early as 2007.

Beginning at North Broad Street, I traveled northwest along Ridge Avenue towards Strawberry Mansion and ended at the railroad tracks just before W. Sedgley Avenue.

As we begin the travel up Ridge Avenue, we immediately meet the JBJ Soul Homes, a development completed in 2014 by Project HOME. This four-story mixed-use development includes retail, offices, and 55 apartment units for formerly homeless and low-income households.

Continuing a few blocks further we encounter our first example of blight. In this stretch of Ridge Ave and 16th Street, seven blighted buildings are flattened to make room for a parking lot and pile of dirt. In the background you can see the Performance Garage, a multi-use space dedicated to supporting Philadelphia’s dance community, who have been in the neighborhood since 2002.

The first signs of development in this stretch of Ridge Avenue are along the leftmost intersection, where the Philadelphia Housing Authority built Freedom Village in 2007-08, a 16-unit multifamily affordable housing development. A few years later infill market-rate development followed further down Ogden Street, which subsequently spurred development along Ridge Ave. As of early 2016 the remainder of the section 201Ridge Ave from the middle of the photo to the right end has been developed in a similar style.

This section of Ridge Avenue is in the early stages of blight. From 2007 to 2014 you can see that the three buildings at the center, the cream colored buildings and the red building attached, have been boarded up. Likely it is only a matter of time before these buildings turn over and are flattened or redeveloped.

This example shows the leveling of three blighted buildings in between 2012 and 2014. These three buildings were boarded up and have several broken windows in 2012. Surprisingly, the building immediately adjacent to the demolitions is listed as for sale in 2012, and appears to have received a face-lift by 2014.

By 2014, the brown brick building has been demolished, expanding the empty lot on this block. The red brick building is now in a dire state of disrepair, with the majority of its windows missing or broken, and even more prominent graffiti markings.

The Philadelphia Housing Authority turned this formerly densely wooded plot into its Nellie Reynolds Garden senior community, a 64-unit apartment building completed in 2009. By 2010, PHA had installed its first Adult Day Center within this structure, providing a fuller spectrum of resources to the community it serves.

Overall the observable change along this section of Ridge Avenue illustrates that private developers and the City of Philadelphia are taking interest in changing the landscape of this major urban thoroughfare. Considering what we know about the economic case for fixing blight, it is promising to see formerly blighted properties transform into parcels of opportunity for safe and affordable housing and new commercial space. However, given the omnipresent supply of blighted properties and vacant land, there is clearly still more work to be done.

Alexandra San Roman was a Senior Research Analyst at Econsult Solutions (ESI) where she specializes in economic development, public policy, and strategic planning.